So What Happened To The Millers In December 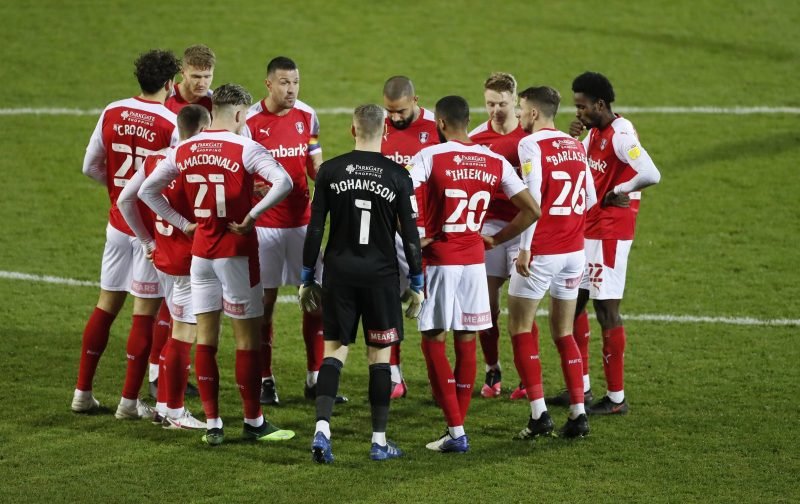 Rotherham United started December in nineteenth place in the Championship and on thirteen points, six points better off than bottom placed Derby County but fifteen points worse off than Norwich City in top spot.

The first game of the last month of 2020 saw us welcome Brentford to the New York Stadium on a cold Tuesday night. Paul Warne’s men did well in the first half with the Bees having to do a bit of defending. But the visitors came out the better for the second half with Ivan Toney a bit of a thorn in the side for the Millers. He got the better of Richard Wood who saw a yellow for pulling him back and on fifty-seven minutes he provided the cross for Marcus Forss to open the scoring. Mickel Miller came on for Joe Mattock for the final twenty minutes of the game with his first touch being a foul on Mbeumo and a booking. And with the former Hamilton player on the pitch for just ten minutes he got his marching orders after a foul on Sergi Canos brought him a second yellow and a penalty for Brentford which Toney duly scored.

The EFL and PL agreed a package to help keep teams in the bottom three divisions (Championship and Leagues One and Two) afloat through the uncertain times we were – and still are – going through.

December’s first away game of the month saw the Millers travel to Birmingham to take on Coventry City at their temporary home. French striker Maxime Biamou was the star of the show for the hosts opening the scoring on five minutes before his long free-kick seven minutes later found a Coventry player who hit the post with the ball coming out to Tyler Walker who put it in the back of the net to make it two-nil to Coventry before Biamou hit the post on the half-hour mark. On seventy-two minutes a City free-kick bounced off the legs of Michael Smith into the net before the Millers got a consolation goal five minutes from the end after Kyle Vassell was brought down in the area and Dan Barlaser scored the resulting penalty making the score three-one to Coventry.

Another away game three days later, this time at Watford, brought another defeat. With just four minutes on the clock the hosts took the lead with a Christian Kabasele  toe poke and that was doubled within fifteen minutes when a mistake by Wes Harding allowed Troy Deeney to pick up the ball and make it two-nil. Kyle Vassell brought off a good save from Hornets’ ‘keeper Ben Foster with Angus MacDonald seeing a header go just wide while Matt Crooks also had a couple of attempts in the second half but none of them brought goals.

After three defeats Millers Manager Paul Warne said that he knew his job wasn’t safe although Chairman, Tony Stewart, had said he backed the Manager.

A day later the Millers were back at the New York Stadium when Bristol City were the visitors. Rotherham’s display was dominant and after just four minutes Matt Crooks headed them into the lead. The hosts should have had a penalty when Matthew Olosunde was tripped in the box but referee Leigh Doughty wasn’t interested. In the last five minutes of the first half the Millers got another goal this time from Michael Smith to make it two-nil. Viktor Johansson had a fairly quiet afternoon just having one save to make from Famara Diedhiou with Ben Wiles coming close to making it three for the hosts but could only fire into the side netting.

The Millers were being strongly linked with Ross County striker Ross Stewart – but so were many other clubs.

On the back of the first win of the month the next game saw the Millers away at Blackburn which was a game that didn’t wake up until Michael Smith shot Rotherham in front just after the hour mark. Matt Crooks might have made it two but a goal ten minutes from time from Harvey Elliott, on loan from Liverpool, made it one-all. Seven minutes of time added on saw the Millers go close with Freddie Ladapo who saw his shot go inches wide with a free-kick for Rovers seeing Adam Armstrong get the ball and give the hosts the win. I think everyone described that as ‘cruel’.

As we all got ready to watch the next game which saw Wayne Rooney bring his Derby County side to the New York Stadium the game was called off an hour before kick-off with members of the Millers squad and staff testing positive for Covid-19. Our Boxing Day game away at Middlesbrough was also postponed.

I think most of us were expecting our South Yorkshire derby game at home to Barnsley to be called-off too but the game went ahead with Millers Boss Paul Warne fearing retributions from the EFL if we didn’t play.

The game was a win for our neighbours who were two up in fifteen minutes with goals from Cauley Woodrow and Alex Mowatt with the Millers putting up a fight in the second half and pulling one back on fifty-seven minutes thanks to Michael Smith’s third goal in three games. Freddie Ladapo should have got the Millers a point when he found himself one-on-one with the Tykes’ ‘keeper but it wasn’t to be and it was another home loss for Rotherham to end the year.

Rotherham United ended December in the bottom three, just one point above bottomed placed Wycombe Wanderers although with two games in hand.

January has to be better.