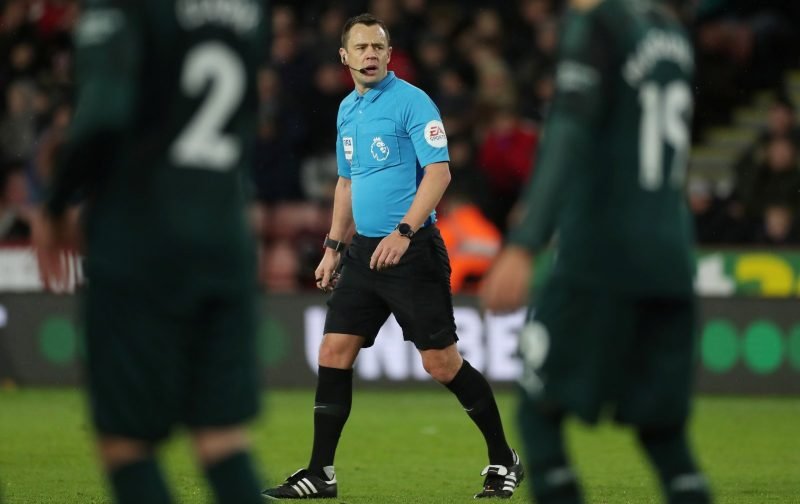 Rotherham United travel to Goodison Park on Saturday to take on Everton in the Third Round of the FA Cup when Stuart Attwell from Warwickshire has the whistle.

Stuart started refereeing at a local level rising from the NIC Nuneaton Sunday League, Midland Combination, Southern League and Nationwide Conference before joining the Football League list of assistant referees for the 2006-07 season. After just one year he was promoted to the National list of Referees. In June 2008, he was promoted to the list of top flight officials in the Premier League, after just one season in the Football League, which made him the youngest ever Premier League referee at 25 years of age but he was demoted from the Select Group in February 2012, returning to refereeing in the Football League.

The last time Stuart and the Millers met was at the New York Stadium on Valentines Day 2017. Semi Ajayi opened the scoring on eleven minutes for the hosts with Huddersfield Town’s Joe Lolley equalising less than ten minutes later. The Millers went back in front on seventy-one minutes but four minutes later the visitors equalised again this time through Elias Kachunga and two minutes into time added on Tommy Smith gave the Terriers all three points.

Earlier that season Stuart was at the New York Stadium when Leeds United were the visitors in November. Chris Wood put the visitors in front on fourteen minutes and just before the half-an-hour mark Peter Odemwingie saw red for a nasty challenge on Liam Cooper leaving the Millers down to ten men. On the stroke of half-time Souleymane Doukara doubled Leeds’ lead with Richard Wood getting a consolation four minutes from time for the hosts. There were two yellow cards that day both to Leeds players Robert Green and Eunan O’Kane.

Stuart was also in the middle at the John Smith’s Stadium earlier that season. Elias Kachunga gave Huddersfield the lead on two minutes with Danny Ward making it one-one on thirty-four minutes. But two minutes later Nahki Wells put the hosts back in front with the final score being two-one. Joe Newell saw yellow for the Millers that night along with Town’s Dean Whitehead, Sean Scannell and Jack Payne.

His first appointment was for Rotherham’s opening day game at Hereford United in August 2007. He kept his cards firmly in his pocket and the game ended nil-nil.

He also reffed a Millers game in February 2016 when we were away at the Macron Stadium. Jay Spearing put Bolton Wanderers ahead on just two minutes but a goal from Chris Burke two minutes before half-time levelled things up. On the stroke of full-time Wanderers won the game with a goal from Kaiyne Woolery. Booked that day was Joe Mattock and Joe Newell both of Rotherham.

The game before that was in August 2014 when the Millers entertained Brentford at the New York Stadium. It was the day the ‘big screen` made its debut at the Stadium and, like the Millers, it had problems on the day. A goal on the stroke of half-time from Andre Gray gave the Bees the lead and then in the final minute of the game Nick Proschwitz made it two-nil. Stuart showed two yellow cards to Brentford players that day – Harlee Dean and goalkeeper David Button for time wasting.

Stuart was also in charge of our game on New Years Day 2013 when the Millers were the visitors at Spotland and beat Rochdale by two goals to one. Ashley Grimes put the home side in front just before the half-hour mark with Kayode Odejayi equalising on seventy-eight minutes with loanee Courtney Cameron scoring his first ever professional goal by getting the winner for the Millers on the ninetieth minute.

September 2013 saw him ref us again when Steve Evans’ team made the trip to the Bescot Stadium. Daniel Nardiello put the Millers in front on twenty-one minutes but twelve minutes later Sam Mantom equalised for Walsall giving both sides a point.

Another September game he was in the middle for one our our games was in 2008 which was a one-nil defeat at Chesterfield when he also booked six players – those being the Spireites Jamie Winter along with Millers players, Mark Lynch, Nick Fenton, Andy Nicholas, Mark Hudson and Alex Rhodes.

This season Stuart has been in charge of twelve games showing fifty-five yellow cards and one red card.

Running the line on Saturday we have James Mainwaring and Wade Smith. The Fourth Official will be Jeremy Simpson, Paul Tierney is the Video Assistant Referee and the Additional Video Referee is Andrew Halliday.

Please Note – this game is a 12 noon kick-off