Where Are Our Wembley Heroes? 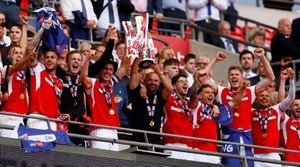 Rotherham United know that they will be facing Morecambe next season after the Shrimps were Wembley winners in the League Two Play-Off Final yesterday against Newport County.

It’s three years since Richard Wood scored twice to give the Millers an extra time win in the League One Play-Off Wembley Final but what’s happened to the players in that team?

Goalkeeper Marek Rodak was in his second loan, from Fulham, with Rotherham. Since that day in May 2018 the Slovakian has played for his international team and made a number of appearances the Cottagers plus another play-off appearance at Wembley helping Fulham into the Premier League where he made a couple of appearances this past season. He’s also played in EFL and FA Cup games for Fulham and Nation League and the European Championships for his country.

Josh Emmanuel came to Rotherham on loan from Ipswich Town and was voted the Millers Young Player of the Year. After Rotherham he had another loan spell this time with Shrewsbury who he helped the Millers beat in that game at Wembley before signing a season deal with Bolton Wanderers. The following season he joined Hull City playing thirty-one games this last season helping them to get promoted as Champions to the Championship.

Championship side West Bromwich Albion came a-calling for tall defender Semi Ajayi in the summer of 2019 and he helped them get into the Premier League as runners-up. Semi made thirty-three appearances for the Baggies in England’s top tier and although he helped out with three goals he couldn’t stop them from going back into the Championship.

Millers fans were sad to see Will Vaulks leave but for the Welsh International it was an easy decision to stay in the Championship with Cardiff City after Rotherham were relegated. His first season saw Will help the Bluebirds to the Championship Play-Offs but lost on aggregate to Fulham. Last season he played forty-four games for Cardiff his season ending a little early due to him getting a red card in April.

Winger Jon Taylor signed for the Millers in August 2016 on a three-year deal from Peterborough United. At the end of his contract he joined League One side and neighbours Doncaster Rovers. He has played over sixty games for Rovers who finished in fourteenth place this last season.

Dublin born midfielder Richie Towell came to Rotherham from Brighton on loan which lasted two seasons. May 2019 saw him join newly promoted League Two side Salford Town. At the end of this season he moved back to Ireland and will start next season with Shamrock Rovers.

Joe Newell joined Rotherham in 2015 from Peterborough United and went on to play one hundred and fifty times for the Millers. Although the midfielder was offered a new contract he took the decision to leave and June 2019 saw him move North of the Border to Scottish Premier side Hibernian. He helped Hibs to the Scottish FA Cup Final at Hampden Park playing just over seventy minutes in their one-nil loss to St Johnstone.

The summer of 2017 saw striker David Ball say that Millers’ Manager Paul Warne’s ambitious plans persuaded him to sign for Rotherham. He played thirty-five games that season, missing a penalty in the game at Wembley and made just three appearances the following season before joining Bradford City on loan until the end of the season. July 2019 saw him move across the world to join Australian A-League side Wellington Phoenix.

Anthony Forde, who came off the bench at Wembley, joined Rotherham from Walsall in 2016 going on to play in over one hundred and ten games before leaving at the end of his contract in 2019. The Republic of Ireland U21 international joined Oxford United that summer seeing himself back at Wembley again in a League One Play-Off Final with the U’s losing to Wycombe Wanderers. In the season that has just finished Anthony was again involved in the League One Play-Off games but Oxford lost out on another Wembley final losing to eventual winners Blackpool.

Another player who came off the bench that day was Australian Ryan Williams. Quick winger Ryan joined the Millers from neighbours Barnsley in the summer of 2017 and played eighty-eight times and was another who didn’t take up the option of a new contract starting the 2019/20 season with League One side Portsmouth. In his first season he helped Pompey to the Play-Offs but not to Wembley as they lost on penalties to Oxford. Since leaving the New York Stadium Ryan has made his international debut for Australia.

Last, but not least, we have Canadian born forward Caolan Lavery who came to the Millers on loan from Sheffield United in January 2018. His introduction from the bench at Wembley was his last appearance for Rotherham and he joined League Two side Bury the following season. The following year he moved to Walsall and has played more than eighty times for the League Two side.

Of course there was also Richard Wood, Joe Mattock and Michael Smith who are still playing for Rotherham United – or at least they are as I write this article.

Will we be making another Wembley appearance at the end of this season? Only time will tell.