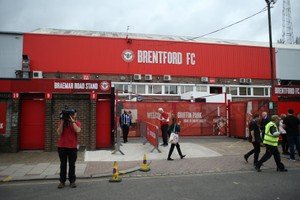 Rotherham United make the trek down to Greater London to take on Brentford at Griffin Park for what will be the sixty-first league meeting between the two.

Brentford finished ninth in the Championship last season making a little progress on the season before when they finished in tenth place, and, in certain circles, were called the Championship’s Entertainers.

Rotherham United fought their way back into the Championship a season after leaving it by winning the League One Play-Off Final at Wembley, after finishing the season in fourth place, which surprised quite a few people.

Dean Smith was appointed The Bees Manager in November 2015, a year before Paul Warne took over as caretaker Manager of the Millers.

Millers Boss Paul Warne has said that he already has his starting eleven in mind but the only one we can really be sure of is Marek Rodak in goal. The Head Coach at Brentford, Dean Smith says that there hasn’t been much of a turn around in personal at Griffin Park during the summer but he’s pleased with what he’s seen in pre-season.

Brentford will give a late fitness test to Neal Maupay and Emiliano Marcondes took a bit of a battering in the friendly against Watford.

The Millers have everyone, except long term injured Darren Potter, fit and raring to go although I’d be surprised to see Jamie Proctor start, though he could well be on the bench.

Oliver Langford has the honour of refereeing Rotherham’s first game of the season and for those who like a bit of history there’s a quick run down if you Click Here.

The Millers first home game of the season is on Saturday, 11th August when Ipswich Town are at the New York Stadium. Kick-off is 3.00pm.