Woody ‘Get Behind Us’ 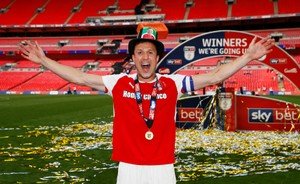 Rotherham United skipper Richard Wood has asked the fans to get behind the team.

The Millers have ten games left until the season ends, seven of them this month, and for them to survive in the Championship they probably need to win the majority of them. To get to the ‘magic number’ of fifty points, which is often what is needed to stay up, Paul Warne’s men need another fifteen points but, possibly more important, lots of stamina having so many games this month.

Speaking to the Official Sit Click Here Woody, who was suspended for the loss on Easter Monday to lowly Wycombe, said he realised it was a ‘disappointing result.’

Well, that’s one thing you can say about a three-nil home loss to the team at the bottom of the table. But, more disappointing than the result, for me, was the way we played. We missed chances, a lot of chances, in the first half but the second half was a poor display and very unlike the Millers and many of us, after that game, were resigned to the fact that it looked like we’d be plying our football back in League One next season.

‘It was a setback, ‘ the Millers captain said, ‘It is not the end of the road, we’ve got enough games to sort it out, enough games to keep us in this division. We didn’t get promoted to make up the numbers and we are all desperate to stay in this league and putting on Championship football for the fans when they return.

‘Saturday is a perfect opportunity for us to go and put it right before a very busy week.’

We take on Huddersfield Town at their place on Saturday. I don’t think Saturday is going to be an easy game. The Terriers will want to prove something after their seven-nil loss, last night, to top of the table Norwich City. Then, on the back of that we have home games against Queens Park Rangers, Coventry City, Birmingham City and Middlesbrough and I don’t think we are naïve enough to think that we will get twelve points from those three games – are we? Or could we?

The games are all at the New York Stadium with three of those in front of the camera’s so surely that must be motive enough to fight for wins, to possibly push our way out of the bottom three.

If, as fans, we were there watching wouldn’t we be urging and shouting the lads on? We can’t be there but we can support from afar and urge the lads on via social media.

I’m with Woody. I know it won’t be easy but let’s put our disappointment behind us and show the lads that the fans are still behind them.

Let’s hope we are singing about his magic hat for the rest of the season.