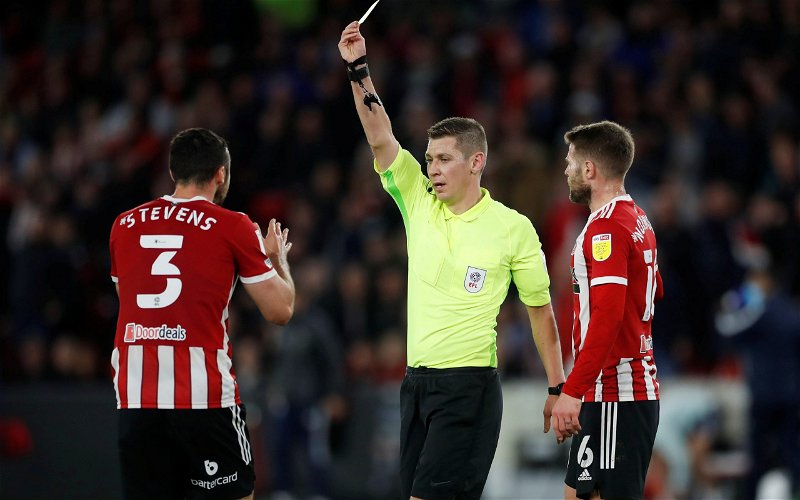 A teacher by trade Matt began his career as an official at the tender age of fourteen getting promoted to the EFL List of Assistants in 2014 operating there for two seasons before hanging up the flag and concentrating on refereeing in 2016. Matt got promotion to the National List of Referees prior to the 2018/19 season.

We’ve met Matt a number of times in the past the last time being in March 2021 at Ashton Gate where goals from Michael Smith and Richard Wood saw the Millers beat Bristol City two-nil in the Championship. George Hirst was the only Miller booked that day.

Just a few weeks before that he was in the middle for our home game to Nottingham Forest when a a Ryan Yates goal on the sixty-seventh minute gave the visitors all three points Michael Ihiekwe, Angus MacDonald and Michael Smith saw yellow cards that evening for the hosts.

In January he saw six goals when Stoke City were the visitors to the New York Stadium. An own goal from Angus MacDonald gave the visitors a fourteen minute lead with Matt Crooks equalising just after the half hour mark. Michael Smith put the hosts in front six minutes into the second half only for Danny Batth to get a Potters equaliser with Crooks making it three-two with his second of the game minutes later. But with fifteen minutes to go Stoke equalised again this time from Nick Powell. Crooks and Matt Olosunde saw yellow on that Tuesday evening.

Matt was also in charge of our game in November when Rotherham made the trip to Wales to take on Swansea City. A goal from Matt Grimes on the twenty-eighth minute was enough to give the hosts all three points. He also been in charge of our away game at Reading the month earlier which was a three-nil win for the Royals.

In the thirty-four games Matt was in the middle for last season he showed one hundred and thirty-eight yellow cards and eight red.

Running the line we have Robert Hyde and Andrew Aylott while the Fourth Official is Will Finnie.