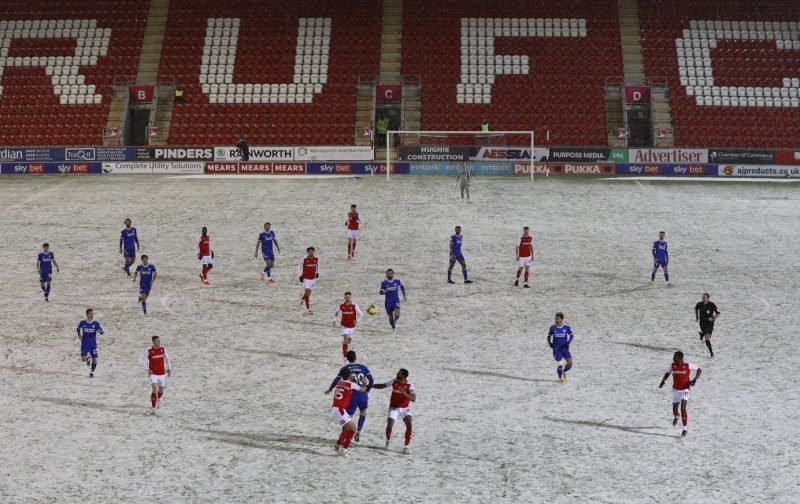 Some nice football, a lot of head tennis, the snow, decisions not given and two good goals saw Cardiff City take all three points back to Wales from this evening’s re-arranged game at the New York Stadium.

Although the Millers probably had more of the play in the first half it was the visitors who had a chance in the opening minutes when a cross in was meant for Kieffer Moore but Richard Wood was there first. Some nice work between Matt Crooks and Michael Smith saw a lovely back heel from the former looking for Crooks but Curtis Nelson was there before him. Clarke Robertson then did well to find Ben Wiles in the box but his shot was blocked by Sean Morrison before the first real chance of the game came on fifteen minutes when a lovely pass from Lewis Wing found Smith who saw his effort also blocked by Cardiff defenders. At the other end former Millers skipper Will Vaulks trademark long throw found Perry Ng who shot straight into the arms of Millers’ ‘keeper Viktor Johansson. Smith was causing problems in and around the City box and Wing found him again only for his shot to take a slight deflection to go wide. Crooks got away from his marker sending Smith on his way only for his shot to bring off a good save from Dillon Phillips in the Bluebirds goal. Johansson got the ball and threw it out to Wiles who in turn found Crooks with the midfielder giving it back to Wiles for him to cross to Wing who saw his shot go just wide. On the half-hour mark the Millers had a good shout for a penalty when the ball went into Smith and was pushed over by Aden Flint in the area and everyone except the man who mattered Geoff Eltringham thought it was a spot-kick. More pressure from the hosts saw a superb fingertip save from Phillips with the resulting corner finding Michael Ihiekwe who put the ball into the side netting. At the other end Johansson did well to get to a low shot from Moore but couldn’t do anything when Sheyi Ojo got into a great position with just the Millers’ ‘keeper to beat he put the ball into the net to give Cardiff the lead going in at half-time.

The second half began with a superb save from Viktor Johansson who did ever so well to stop a Sean Morrison shot from short range. And it was Johansson again minutes later who got the better of Harry Wilson and Sheyi Ojo from a Will Vaulks throw before denying Kieffer Moore. The first change of the evening came from the visitors with  Josh Murphy replacing Sheyi Ojo. Just after the hour mark the Millers equalised after a Lewis Wing cross found Michael Smith who in turn sent in a perfect ball for Matt Crooks who had lost his marker and put the ball into the net. Joe Ralls had been down a couple of times and was taken off with City fetching on Marlon Pack. Cardiff nearly went in front again after a long kick from ‘keeper Dillon Phillips found Murphy who put the ball over Johansson and just over the crossbar onto the top of the net. The first Rotherham sub saw Matt Olosunde make way for Ryan Giles. With Clarke Robertson complaining he’d been pushed play went on and only some good defending from Richard Wood stopped Murphy in his tracks. Minutes later Crooks did well to get the ball off the line from a Wilson corner. As the snow came down and there was a farce with the ref demanding a yellow ball which didn’t appear to have as much air in it as it should, nor did the replacement and a pump was sent for the Millers made another change fetching on Freddie Ladapo for Dan Barlaser. With five minutes to go Wilson got past Wes Harding and sent in a super cross to Joe Bennett who just had Johansson to beat which he did heading in for Cardiff’s second of the game. George Hirst was sent on for the Millers replacing Richard Wood. Wing tried his luck from distance but a Cardiff defender cleared followed by Harding looking for space to shoot but Morrison stopped him in his tracks. Deep into the six minutes added on the Millers had another clear shout for a penalty when a Wing cross appeared to be put out for a corner by the arm of Vaulks, but again referee Eltringham wasn’t interested. As the game came to an end Wing had a chance and as his shot went over the crossbar the whistle went for the end of the game.

All those chances in the first half, some good defending and great goalkeeping in the second Rotherham United really deserved something out of this game. But, as we know, you don’t always get what you deserve.