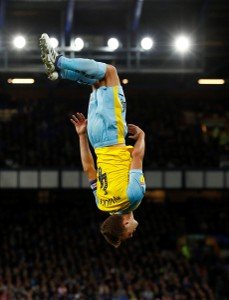 Rotherham United’s goals on Tuesday night against Queens Park Rangers both came from the back half of the team.

A good goal from skipper and central-midfielder Will Vaulks for the first followed by a free header from defender Clark Robertson which got the Millers back into the lead.

‘It was a great finish from Will,’ Millers Boss Paul Warne told iFOLLOW, ‘and Clark Robertson’s first goal will give him a boost. I do ask the centre-halves to score because we don’t get too many goals.

‘We can’t rely on Manning scoring penalties every week or Procts (Jamie Proctor) coming off the bench to score every week. It is important that we score goals so the more people who chip in the better.’

The Millers aren’t prolific goalscorers and Warney is right, everyone has to be prepared to shoot whether it’s from the outside of the area or inside the box.

Rotherham have scored twenty-two goals so far this season with midfielder Ryan Manning, striker Jamie Proctor and stand-in skipper Vaulks each leading the pack on four.

It will soon be January when a number of our fans have made it clear that they would like to see a prolific striker come in during the transfer window. And I can understand that. To stay in this league goals are essential to win games, after all, that’s what football is about.

But, in my mind (and I know it’s not for everyone) I think it’s just as important to keep clean sheets. Yes, I know you win games by scoring more goals than the opposition but I do think a tight defence is also a must.

So, in January would you like to see us get in a striker who can get us those goals or perhaps a defender who can help stop those goals going in the other end?

As for Saturday I think the away supporters would be delighted to see one (or more) of Will Vaulks’ back flips!