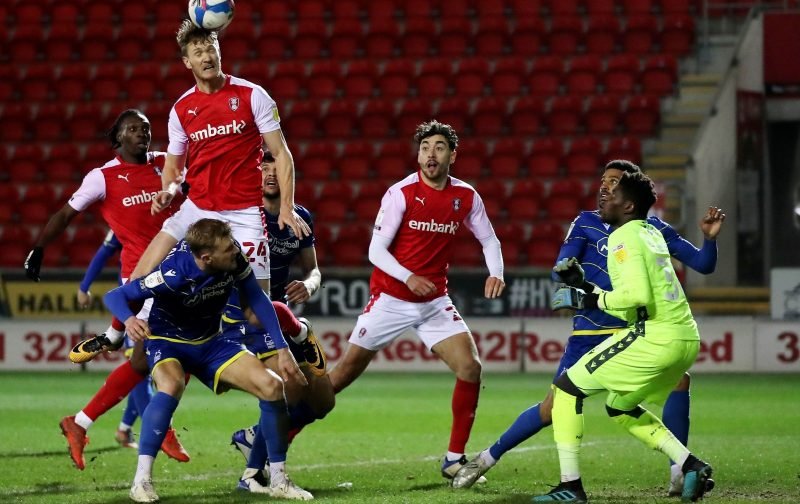 A scrappy game this evening at the New York Stadium was settled by a second half goal which had a bit of luck about it but always looked like it was coming.

It was a bit of a scrappy opening with Wes Harding having to be aware stopping a cross reaching Glenn Murray in a good position from a cross from Luke Freeman. And it was Harding in action again a couple of minutes later at the other end when he found the head of Michael Ihiekwe but the captain put the ball over the crossbar. A long pass forward from Forest ‘keeper Brice Samba almost found Anthony Knockaert but Millers’ ‘keeper Viktor Johansson grasped it at the second time of asking. Some nice work from Matt Crooks found Ben Wiles but the Millers home-grown midfielder couldn’t get the better of the Forest defence. It was Wiles and Crooks working together again who set Smith off on a run with the Millers tall forward taking a shot from just outside the box putting his effort just wide. At the other end Knockaert put in a lovely ball for Cafu with the Portuguese player putting his shot wide of the upright followed by the first yellow of the night going to Ihiekwe for, probably unnecessarily blocking off Filip Krovinovic which means the Millers skipper misses the next two games. Cyrus Christie was the next Forest player to have a shot seeing the ball go just past the post before a cross from Gaetean Bong found Murray who hit the ball into the net as the linesman put his flag up for offside. With five minutes to go in the first half Lewis Wing worked the ball from one foot to the other and let fly but it went straight to Samba. After a Millers foray forward the visitors tried to counter attack but Smith brought down Ryan Yates stopping the action and getting a yellow card for his trouble. The visitors won a free-kick in a great position and after five players debated who was going to take it, Knockaert won and let fly bringing off a brilliant save for Johansson.  A bit of argy-bargy between Harding and Knockaert saw neither spoken too by the ref although the Sky commentators thought there might have been a case for the Forest player to see a red card, though it might have been a little harsh.

Forest started the second half the better side and had the ball in the net but a foul on Ben Wiles gave the Millers a free-kick. Some nice work from Forest won them a free-kick which Anthony Knockaert took beautifully finding the head of Glenn Murray who brought off a brilliant diving save from Viktor Johansson although the flag had gone up for offside. Matthew Olosunde came off worst in a challenge with Luke Freeman and tried to carry on but had to have treatment on an eye injury. Ben Wiles had a shot from just outside the box which went wide before Johansson was on form again to stop a Knockaert shot going in. Matthew Olosunde couldn’t carry on and was replaced by Freddie Ladapo while Forest brought on Joe Lolley for Luke Freeman. On the sixty-seventh minute Viktor was finally beaten when a short corner went to Cyrus Christie whose curling cross found  Tobias Figueiredo who in turn got the ball to Ryan Yates who put the ball into the net, although there is the question of was he offside? Rotherham tried to get the equaliser and a low cross from Wiles went across goal with Brice Samba nowhere near before some nice work from Ladapo fizzed a cross into the box but no red shirt was there to collect. On seventy-five minutes the best chance of the game fell to Ladapo from a Wes Harding free-kick but the Millers sub looked more like he was dancing on ice than on a football pitch as he completely missed the ball when it looked like it would be a certain goal. Forest brought on Lyle Taylor for Glenn Murray before both Angus MacDonald and Tobias Figueiredo were booked for a bit of handbags. A double change for Rotherham saw Kieran Sadlier and Ryan Giles replace Dan Barlaser and Ben Wiles. Filip Krovinovic sent Taylor off down the pitch but his shot from outside the box went just wide. Anthony Knockaert and Krovinovic were replaced by Tyler Blackett and James Garner. Lolley had a shot which was an easy save for Johansson before Michael Smith sent a good ball in for Ladapo whose shot was blocked. A long throw from Wes Harding was flicked on by Michael Ihiekwe to Michael Smith who saw his header from close range hit the crossbar and go to safety.

Sorry to say but I don’t think there were many positives from tonight’s game – we looked like we’d had two long journeys and never looked like we were up for the fight. So, on to Saturday with another home game when Reading are the visitors.