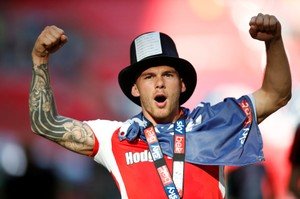 Jon came through the Youth ranks at Shrewsbury Town and went on to play over one hundred and thirty times for the Shrews before joining Peterborough United in the summer of 2014.

The Liverpool born winger signed for the Millers in August 2016 on a three year deal which, at the time, was rumoured to be for a club record fee. Tayls went on to make forty-three appearances in that first season, scoring four time, two of those earning Rotherham a home point against Nottingham Forest. He scored five goals last season which included one in the first leg of the play-off semi final away at Scunthorpe while playing for seventy-five minutes in the final at Wembley against his former side Shrewsbury. This season, so far the twenty-six year old has made seven appearances in a Rotherham shirt.