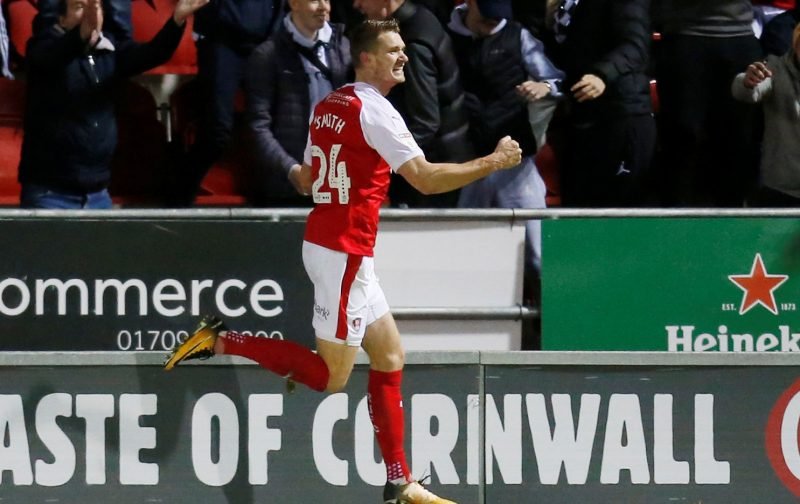 Rotherham United answered their manager’s call after he practically slated them for their play in the two-all draw at Rochdale last night by getting a win away at Harrogate Town this evening.

Although the hosts started the better it was the Millers who took the lead on seven minutes when a Dan Barlaser free-kick found the head of Michael Smith who headed home. A minute later Barlaser was in action at the other end when he made a good challenge on a Town trialist to stop him getting in on goal. Harrogate got forward again and this time it was Jake Hull to the rescue getting in a good tackle on Jack Muldoon. Seven minutes after his first, Smith got to a Jacob Gratton cross and with Nathan Sheron slipping he tapped the ball past Town ‘keeper Joe Cracknell to double Rotherham’s lead. Gratton himself came close when he tried his luck from just outside the area only to see it come off the post as far as Shane Ferguson who brought off a good save from Cracknell. A Trialist forced Jake Cooper to put the ball out for a corner with Danilo Oris seeing a shot turned past the post for another corner which was cleared. The hosts might have pulled one back just after the half-hour mark when a ball in from Sheron found the head of Muldoon who perhaps should have done better. Smith had a chance for a hat-trick when a Ferguson corner saw him climb higher than anyone else only for his header to hit the back of Rory McArdle before going out of a Rotherham leg. Two trialists for the home team worked well together but couldn’t get the ball past Josh Vickers with the Millers’ ‘keeper having to head away a back-pass from Ferguson in time added on at the end of the first forty-five minutes.

Josh Chapman and Sam Greenhouse came of for the Millers for the second half taking over from Josh Vickers and Dan Barlaser. Harrogate had a good chance five minutes in when a Trialist made room for himself to shoot with Chapman doing well to pluck the ball out of the air. The Millers won two corners firstly from their trialist then from Jake Hull with Shane Ferguson taking the set-piece and finding Michael Ihiekwe who made it three-nil to the visitors. This was Ferguson’s last action with Curtis Durose coming on to take his place. Harrogate made a number of changes fetching on George Thomson, Alex Pattison, Warren Burrell, Luke Armstrong, Aaron Martin for Jack Muldoon, Lewis Page, Josh Falkingham, Danilo Orsi and a Trialist. The Rotherham trialist got himself into space and sent the ball to Jacob Gratton who in turn found Jamie Lindsay whose shot was deflected wide and the corner coming to nothing. Chapman did well to get hold of a shot from Pattison but could do nothing a couple of minutes later when Armstrong volleyed home getting his first goal for Harrogate. The visitors introduced Billy Carroll for Michael Iheikwe before Town’s trialist brought off a good save from Chapman. Jamie Lindsay made way on seventy-six minutes for Hamish Douglas and was followed minutes later by Jacob Gratton who was replaced by Joel Harvey. Town were testing the Millers and there was another good save from Chapman followed by a great shot from Douglas from some thirty yards out and he was unlucky to see it come back off the crossbar to safety.