Another Home Loss for Millers 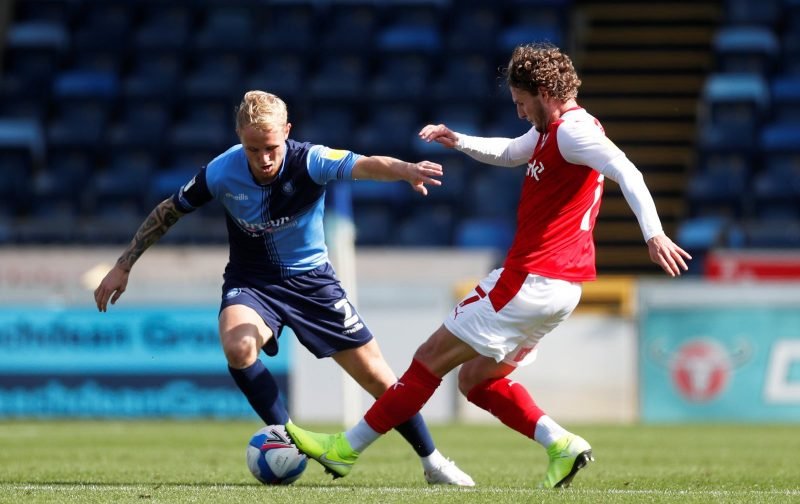 Despite taking a two-one lead going into half-time Rotherham United lost four-two at the New York Stadium this afternoon with a few boos ringing around the rapidly leaving fans at the end of the game.

Richard Wood had to be on early alert when a James Hill long throw found Callum Morton with the Millers’ skipper getting his body in the way to block a dangerous looking cross from the West Brom loanee. At the other end a low cross in from Jamie Lindsay went to Michael Smith with Darnell Johnson doing well to stop the Rotherham striker in his tracks. The first shot towards goal came on thirteen minutes when a super cross from Smith found Chieo Ogbene who hit the ball wide after being closed down well. And it was Ogbene again who sent a cross into the area minutes later but the Cod Army’s ‘keeper Alex Cairns, who had spent a few months with the Millers without playing, got to the ball before either Smith or Freddie Ladapo. The first change of the game followed when Darnell Johnson went off injured being replaced by Max Clark. With twenty minutes gone a Kieran Sadlier corner found the head of Michael Ihiekwe who saw the ball tipped over by Cairns. Four minutes later the visitors were in front when a counter-attack saw Callum Camps play the impressive Morton through and with the Millers defence appearing to stand looking he shot from an awkward angle getting it past Viktor Johansson in the Rotherham net. Minutes later Wood did well to stop Morton getting through again followed by Ladapo sending a perfect ball through for Ben Wiles who shot from just outside the box causing Cairns into a save. The host got a free-kick which Sadlier took finding Smith but he saw his header go just wide but a minute later they were level after Wes Harding’s long throw into the box saw Smith rise highest and put the ball into the net. Ladapo was next to have a try when a ball found it’s way to Wood in the area who got the better of his marker and head the ball down for Ladapo with the striker seeing his chipped shot go onto the roof of the net. In time added on referee Hicks pointed to the penalty spot after Ogbene was pulled back in the area by Camps and up stepped Sadlier to send the ‘keeper the wrong way and make it two-one to the Millers.

Fleetwood started the better in the second half and Callum Morton got the better of Richard Wood before a pass meant for Gerard Garner was intercepted by Harrison Biggins who shot wide before a chance fell for Clark who volleyed over. On fifty-four minutes the visitors equalised after Camps, who looked off-side, sent a lovely ball to the feet of Garner who shot past Viktor Johansson to make it two-all. Clark was booked a couple of minutes later for a poor foul on Ben Wiles. A Wes Harding cross was headed away by Tom Clarke with the visitors getting a free-kick in a good position after Ollie Rathbone was deemed to have fouled Biggins which Danny Andrew stepped up to take and curled a fantastic shot into the far corner of the goal to put them back into the lead. Some good work from Harding saw him find Michael Smith who saw his effort go inches past the upright. Rotherham made two changes fetching on Dan Barlaser and Rarmani Edmonds-Green for Richard Wood and Ollie Rathbone which raised a few eyebrows amongst the Millers faithful plus a few boos. And three minutes later the visitors scored a fourth after Johansson had made a good save from Garner only to see the ball fall to Camps who doubled their lead. Rotherham made another change fetching on newly loaned Will Grigg for Jamie Lindsay. A Barlaser header found Michael Ihiekwe who in turn sent the ball down for Edmonds-Green with his shot going wide followed by Smith trying to set Ladapo on his way but the ball was intercepted before a shot from Wiles was well saved by Cairns. Ryan Edmondson replaced Callum Morton for Town, who got well deserved applause from the travelling two hundred and sixteen Fleetwood fans. After taking an age to take a throw-in James Hill had just taken it and the referee stopped the game to book him and there was another card for Jordan Rossiter for a bad challenge on Wiles. In time added on Michael Smith and Will Griggs both saw shots blocked before Dan Barlaser sent a ball in for Ladapo who missed, which was probably the story of his day.

Not a bad first forty-five minutes from the Millers to come back from being one down to go in leading but once Fleetwood got the equaliser they played a good game and possibly deserved all three points.