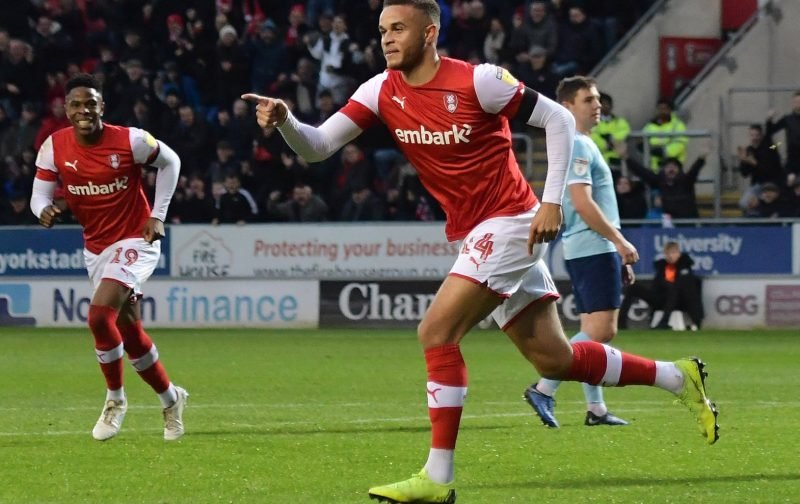 Rotherham United ground out a one-nil home win against Accrington Stanley this afternoon in what wasn’t the best entertaining game we’ve ever seen at the New York Stadium – with ‘Walt’ the pigeon giving us more to cheer about than the game.

The Millers might have gone in front in the opening minute in a move set off by Ben Wiles who sent Chiedozie Ogbene off down the wing who in turn put a ball into the box for Carlton Morris whose shot was well saved by Stanley ‘keeper Dimitar Evtimov before going to safety. A more comfortable save for Evtimov came minutes later after a Wiles cross found the head of skipper for the day Michael Ihiekwe but went straight into the waiting arms of the visiting goalie. At the other end a Dion Charles shot was blocked by Clark Robertson before Matt Crooks tried his luck from distance but it went way wide of the upright. Ogbene did the hard work by racing down the line to keep the ball with his cross missing any red shirted player in the box and going inches wide. Ogbene was proving tobe too quick for the Accrington players and Callum Johnson was the first to get yellow for bringing the former Brentford winger down. But to even it up referee Mr Handley gave Ihiekwe a yellow a minute later when Dion Charles fell over near him. Ogbene then got the better of Seamus Conneely and again found himself on the floor with the resulting Wiles free-kick finding the head of Morris who put the ball into the far corner to give the hosts the lead. Five minutes later Evtimov can count himself lucky not to have seen red when he raced out of his area and brought Crooks down with Mr Handley bringing out a yellow card – one that I’m still shaking my head at. The game was becoming very much a stop-start affair and Robertson was the next in the book when Charles was brought down. Evtimov did well to get the ball before Michael Smith after a good cross in from Ogbene and in time added on a Wiles pass to Morris saw the Norwich loanee curl a shot just wide of the top corner.

Accrington brought on Sean McConville for Joe Pritchard at the start of the second half. A poor challenge on Billy Jones saw Seamus Conneely see yellow. The Millers came close after ten minutes when a Ben Wiles corner saw Clark Robertson get his head to it but the ball went just past the upright. McConville was soon in the action and might have scored if his shot hadn’t curled going just wide before Chiedozie Ogbene sent in a low cross at the other end which found Wiles who stung the hands of Dimitar Evtimov. A short goal-kick found the Millers defence wanting as Stanley flew down the other end with Sam Finley seeing his shot go just wide. Ogbene saw yellow for a foul on Finley followed by Billy Jones getting the same after a foul on Callum Johnson. Morris got the better of his marker only to see his cross-cum-shot punched to safety followed by the Millers defence again slow to react when Stanley flew down the pitch only for Finley to see his shot go wide with the same thing happening minutes later with Finley putting that shot way over the crossbar. A double substitution for the hosts saw Jamie Lindsay and Freddie Ladapo on for Matt Crooks and Michael Smith while Ben Barclay made way for Colby Bishop for the visitors. Ladapo had a good chance within minutes of coming on when he got a good ball from Dan Barlaser and skipped past his marker only to see his shot deflected behind with the resulting corner coming to nothing. With eight minutes to go Ogbene looked to be making sure the ball went out of play when he went down under a challenge. Up stepped Mr Handley giving the Millers winger a second yellow and Stanley a free-kick. The ten men of Rotherham were thankful to see Joseph Maguire’s set-piece go wide. The visitors upped the pace and McConville tried his luck from twenty-five yards out only to see it go just past the post and only some good defending by Michael Ihiekwe stopped them having another shot minutes later. Adam Thompson came on for the home side with Carlton Morris going off and Wilson Carvalho replaced Joseph Maguire for Accrington. Substitute Bishop caused the Millers defenders a few problems getting the ball to McConville who again saw his shot go just wide before Ihiekwe was there again to clear the ball off the line.

The best thing about this game was the three points – yes, it was a slender win but it’s a home win that was well needed by Rotherham United.

I found, at times today, much of our play was played at a pedestrian pace. After a team have twice played a short goal-kick and twice got past the retreating Millers, why let them do it another two times? And again, with corners and throw-ins, Stanley took them quickly and we were all at sixes and sevens.

I’d love to say something about the referee but as he seemed to want the spotlight on him from the start of the game I won’t bother. No, I will. He was never up with play, I think I could run faster than him, him and his partners in crime with the flags must have a different off-side rule to the rest of us and don’t start me on letting players get away with falling over …….

4 Replies to “Home Win For Millers”