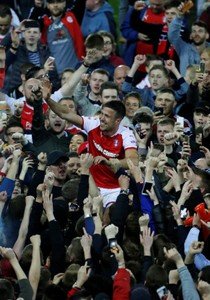 Rotherham United skipper Richard Wood has signed a new contract giving him another year at the New York Stadium.

‘You’ve got to put up with me for another year,’ Woody told iFollow.

The deal has been triggered by the number of appearances the captain has played for Rotherham which, to date has been one hundred and seventy-ifve, twenty-six of those this season. Although he had been given the captains armband on various occasions Woody was handed it permanently in January 2018.

Richard joined the Millers in the summer of 2014 from Charlton Athletic and while with Rotherham has had loan spells at Crawley Town, Fleetwood Town and Chesterfield. His first game came in the Capital One Cup against Fleetwood in August 2014, his first goal coming on Bonfire Night 2016 at home to Preston, his second coming two games later against Leeds United, again at home. All-in-all he has scored seventeen goals in a Rotherham shirt, two of those coming in the 2018 League One Play-Off Final at Wembley.

Asked how he felt about the new deal he said he was ‘delighted and happy to get it sorted.’

‘I wanted to carry on playing,’ the thirty-five year old said saying that there was not thought of him retiring. ‘Age is just a number. As long as I’m contributing on the pitch and feeling fit then I’ll keep going.’

Good news for us Millers!