Wiles Scores Both In Millers Away Win 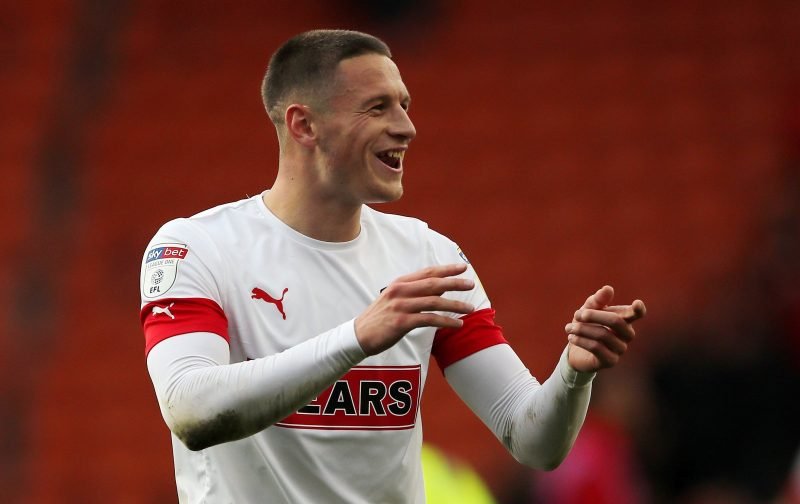 A double from Ben Wiles gave Rotherham United their first win at the now named University of Bolton Stadium this afternoon giving them a two-nil win.

The first corner of the game went to the hosts on three minutes after Richard Wood twice blocked before putting it out for a corner which went out for a second corner headed over by Antoni Sarcevic. At the other end Chieo Ogbene did well and won a corner which was cleared with Bolton counter-attacking and Wood getting a yellow for fetching down Lloyd Isgrove. Ogbene did well to shrug his marker off and send the ball into the area which was deflected to Ben Wiles who put the ball well over when, frankly, it looked easier to score. Isgrove got himself into a good position but his shot was blocked by Joe Mattock before some good work by the Millers saw Ogbene and Grigg, making his first start in a Rotherham shirt, find Ollie Rathbone in a good space who saw his shot saved by Wanderers’ ‘keeper Joel Dixon. A quick throw from Gethin Jones saw the ball taken up field with Rathbone having to defend and put the ball away with the resulting Josh Sheehan corner glanced wide by George Johnston. On eighteen minutes a long throw from Ramari Edmonds-Green fell to the feet of Michael Smith before it found Ben Wiles some twenty yards out who let fly and saw the ball hit the back of the net sending the travelling fans wild. Three minutes later it was two when a Dan Barlaser corner found the head of Wiles who headed down and into the net, definitely making up for the easier miss earlier. At the other end Bolton might have scored but Wood won the ball from Sarcevic and minutes later Eion Doyle really should have halved the deficit when he found the ball at his feet and in plenty of space only for his shot to ricochet off the post to safety. More good work from the Millers saw a couple of corners come to nothing before Ogbene and Smith played a one-two sending the ball to Will Grigg who saw his shot saved by Dixon. Wiles gave away a free-kick in a good place for the hosts with Sheehan putting the ball into the area with Gethin Jones heading over followed by some poor defending letting Bolton in again with Jones’ shot going into the arms of Millers’ ‘keeper Viktor Johansson. A cross into the box by Griggs saw him a whisker away from finding Wiles with the ball nearly going in off a home defender. Tolaji Bola flew down the pitch and was abruptly stopped by Jones on the edge of the area and while the referee moved the ball about a bit a card for the Welshman didn’t appear. Barlaser took the free-kick deciding to have a shot only to see the ball go over the crossbar. The hosts broke and Dapo Afolayan found himself in space but Mattock got there to put the ball out for a corner. A silly foul gave Bolton a free-kick in a dangerous position with Sheehan finding the head of Johnson who had the Bolton fans up and cheering as the ball went into the net only for the offside flag to be up. As the board went up for two extra minutes Wiles sent a good ball to Smith but he saw his shot blocked.

Rotherham started the second half with Chieo Ogbene being replaced by Wes Harding. A poor challenge by Ollie Rathbone left Oladapo Afolayan in a heap although he was soon up and the resulting free-kick came to nothing. The hosts had a number of corners with Viktor Johansson pulling of a good save from Lloyd Isgrove. Joe Mattock got a yellow for a foul on Eion Doyle with Josh Sheehan’s dipping free-kick landing on the roof of the net. More pressing from the hosts saw Ollie Rathbone running back and stopping Bolton get a shot away collecting the ball and sending it up field out of danger. Ben Wiles found Michael Smith in space and the striker had a clear shot at goal which looked to be going into the bottom corner but came back off the post and to safety. At the other end Richard Wood had to be on his metal to block a shot from Afolayan with the resulting corner coming to nothing. A second change for the visitors saw Jamie Lindsay on for Dan Barlaser. A cross from Isgrove into the box was just inches away from Doyle before Afolayan was booked for, well, answers on a postcard. A free-kick for Bolton went to George Johnston at the far post but he couldn’t control and the ball went a whisker past the upright followed by Sheehan having a go from just outside the area which troubled no-one. With twenty minutes to go Bolton’s first change of the afternoon saw Kieran Lee on for Josh Sheehan. Another free-kick for the hosts ended with Wood on the floor and the physio on while Kieran Sadlier came on for Will Grigg and Wood carried on while Elias Kachunga came on for Wanderers for Antoni Sarcevic. The next player to see yellow was Wes Harding for a foul on Afolayan. Lindsay did well to win the ball back and sent it to Smith who shoots from the edge of the area seeing the ball go over. Doyle tried to win a penalty by throwing himself down in the area but Mr James was having none of it. Wiles got the ball in midfield and set Sadlier off on a run with him moving from left to right but he couldn’t get a shot away. At the other end a superb tackle from Harding stopped Afolayan getting a ball in a good position. MJ Williams saw yellow after Sadlier went over as seven further minutes were announced. Five minutes into that added on Sadlier won a free-kick for the visitors with Gethin Jones receiving a yellow card which was the last action of the game.

A box to box first half with some super football all over the pitch while the second half didn’t quite living up to expectations but three points away from home and a clean sheet – what more can you ask for?