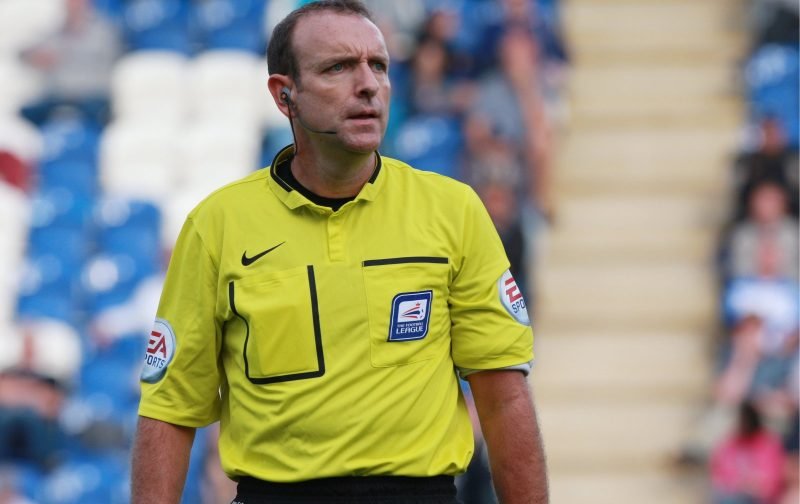 The man in the middle for the Millers next home game on Saturday is Carl Boyeson from East Yorkshire.

The last time the Millers met Carl was in the 2017/18 season when reffed Rotherham three times the last one being in April 2018 when Fleetwood Town were the visitors to the New York Stadium. Ashley Eastham put the visitors in front on just five minutes but an own goal from Nathan Pond seven minutes later saw the teams go in level at half-time. Joe Newell put the hosts in front five minutes into the second half with Town equalising three minutes later thanks to Cian Bolger but a goal from skipper Richard Wood on seventh-seven minutes gave the Millers all three points.

The first time we saw Carl that season was at the New York Stadium when Gillingham were the visitors. Josh Parker and Tom Eaves put the Gills in front with Kieffer Moore halving the deficit on fifty-seven minutes. Joe Mattock was sent off five minutes before time and a minute later Parker scored his second and the visitors third to give them all three points. Richard Wood for the Millers and Gillingham’s Connor Ogilvie saw yellow that afternoon in October.

In February 2018 the Millers travelled to the New Meadow winning the game over Shrewsbury with a Richard Wood goal a minute before half-time. Booked that afternoon were Richie Towell and Joe Newell for the Millers and the Shrews Omar Beckles.

In March 2015 Carl was in the middle for our two-nil win at the John Smith’s Stadium. Kari Arnason and Conor Sammon scored the goals with the Millers going down to ten men on seventy-four minutes after Lee Frecklington had received a second yellow card.

No stranger to the Millers Carl has reffed us many times and was, in fact, the man in charge of our last game at Don Valley in May 2012. Northampton were the visitors and Alex Revell put the Millers in front just after the half-hour mark only for Adebayo Akinfenwa to equalise in the final minute of the game.

Carl was also in charge of our game at the New York Stadium in April 2013 when Fleetwood made their first visit there and he didn’t exactly win the home fans over. Daniel Nardiello put the Millers in front on the third minute but three minutes later a goal from David Ball saw the visitors equalise. Half-way through the first half Lee Frecklington set off at pace and, when he couldn’t catch him, Jamie McGuire resorted to pushing the Millers midfielder over, landing on top of him and then appeared to swing a punch at the former Lincoln player. When other players became involved Mr Boyeson seemed to take an age to sort it out and finally did by showing a yellow card to McGuire and being soundly booed by the Millers fans. Kieran Agard got the winner for the Millers just after the hour mark sending the Millers into fifth place in League Two.

Carl was in charge of a Millers game in August 2013 at Meadow Lane in League One when the only goal of the game was scored on thirty-seven minutes by Kieran Agard to give the Millers all three points. That day Carl showed four yellow cards – three to County players Mustapha Dumbuya, Enda Stevens and Andre Boucaud and Richard Brindley of Rotherham.

Boxing Day 2008 saw Carl at Don Valley when a poor challenge from Marc Joseph on just twenty-four minutes gave him no choice but to show him a red card. Drew Broughton gave the ten-men Millers all three points with a goal twenty-three minutes from time.

Carl was also in the middle for our one-all draw in January 2008 at Millmoor in January 2008 where Stephen Brogan scored the Millers goal. The season before saw Carl twice in charge of Millers games – firstly in September when Dave Hibbert gave Rotherham the lead on seven minutes only for Northampton to score two goals in the second half and again at the start of December when Yeovil were in town. Delroy Facey gave the Millers the lead followed two minutes later by an og from Terry Skiverton. Leon Best and Lee Morris made it two-all but a Will Hoskins penalty on the stroke of half-time gave the Millers a three-two win.

In 2005 the Millers trip to Victoria Park to take on Hartlepool ended nil-nil and the season before Carl was at Millmoor when Chesterfield were in town. Mark Allott put the visitors in front on fifteen minutes but Michael Proctor equalised eighteen minutes later and Richie Barker got the winner seven minutes from time.

September 2003 saw Carl again at Millmoor. Stoke were the visitors when a Darren Byfield penalty gave the hosts the lead and two more goals from Martin Butler in the second half gave Rotherham a much deserved three-nil win.

The first time Carl was in charge of the Millers was our League One game at Vicarage Road in February 2003. Tommy Smith put Watford in front just after the hour mark but goals from Martin McIntosh and Chris Swailes gave the Millers all three points.

Running the line on Saturday we have Matthew Bristow and Declan Ford with the Fourth Official being Christopher Ford.