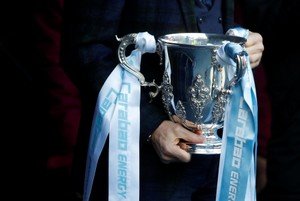 Rotherham United’s first foray into a Cup competition sees them travel to the Montgomery Waters Meadow Stadium to take on Shrewsbury Town in the Carabao (League) Cup.

The next time the two met in this competition was in October 1965 at Gay Meadow. The Millers won the game five-two with John Galley scoring twice and further goals from Frank Casper, Les Chappell and Robin Hardy. The Millers went on to meet West Ham United in the third round

The last time the two met in this competition was in February 2018 at the New York Stadium which was a two-one win for the visitors, despite them going down to ten men eight minutes into the second half. The hosts had a chance to go in front when Toto Nsiala fouled Richie Towell in the penalty area but a stunning save from Dean Henderson stopped Kieffer Moore getting his fourteenth goal of the season. Two minutes later Jon Nolan opened the scoring for the Shrews with Towell equalising on seventy-six minutes after Abu Ogogo had been sent off for a wild challenge on Shaun Cummings. With it look like it would be a point apiece Stefan Payne got the winner for Shrewsbury four minutes into time added on.

Last season the Millers won the first leg of this competition which was a three-one home win over Wigan Athletic. Jamie Proctor scored twice with a goal in between them from Semi Ajayi helping them to a second leg game away at Goodison Park against Everton.

The Shrews failed in the first leg of the League Cup last season after Shaun Whalley had put them ahead goals from David Templeton and a Lucas Akins penalty gave visiting Burton Albion a two-one win.