What Of Our Loaned Out Players? 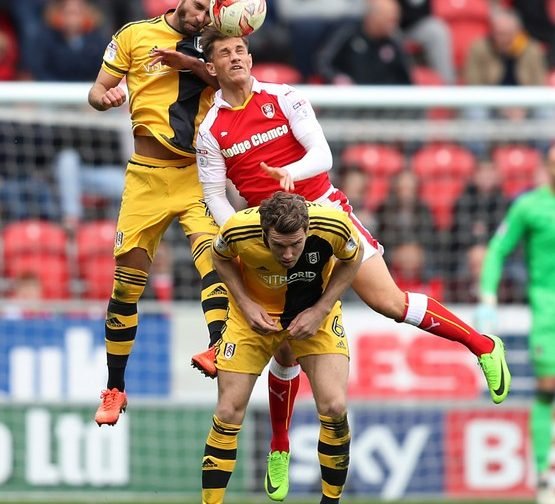 Rotherham United have a number of players out on loan at the moment – but how are they going on?

Strikers David Ball and Jerry Yates are at Bradford City and Carlisle United.

Ball has made fourteen appearances for the Bantams in League One and Cup competitions since joining them at the start of September, his last game being in the FA Cup on Saturday. But the twenty-eight year old, who joined the Millers from Fleetwood in the summer of 2017, is yet to score.

Coming through the Rotherham Youth scheme, Yates joined League Two side Carlisle in the summer on a loan deal until January. Making his nineteenth appearance for the Cumbrians, his only goal came in the Football League Cup win over Morecambe in September. He was red carded in the league win away at Bury in September for ‘foul and abusive language’. He was also involved in the FA Cup at the weekend which saw Carlisle get a one-nil win away at Crewe.

Centre-half Michael Ihiekwe joined the Millers in May 2017 from Tranmere Rovers and made over thirty appearances before being sent out on loan at the end of August to Accrington Stanley until January. The twenty-five year old has been in the news with Portsmouth allegedly keeping an eye on him. In his thirteen appearances Michael’s only goal came at home against Pompey last month. He played the full ninety minutes on Saturday helping Stanley get to the next round of the FA Cup.

In January 2017 it’s rumoured that Rotherham spent ££300,000 fetching left-back Ben Purrington to the New York Stadium from Plymouth Argyle. He played around twenty times in a Millers shirt before this season saw him sent out on loan to League One side AFC Wimbledon where he’s made nineteen appearances, the last one on Friday in the FA Cup when they played away against non-league side Haringey Borough, winning one-nil. His loan is for the full season, although Manager Neal Ardley left the club on Monday.

Defender Dominic Ball is in his second loan spell with Scottish Premier side Aberdeen and has made sixteen appearances so far this season for the Dons which includes two games in the Europa League.

Another defender Emmanuel Onariase has made just two appearances for Rotherham, both in the Checkatrade Trophy last season before he went to Cheltenham on loan. Last month, without pulling on a Millers shirt, the former West Ham United trainee went out on loan to Victoria Road with National League side Dagenham and Redbridge where he has played in three games.

Striker Alex Bray joined the Millers in the summer of 2017 from Swansea City after a successful loan spell where he played in a handful of games. He made another handful of appearances last season before being loaned out to Forest Green. Not pulling on a Rotherham shirt this season he went back out on loan, this time to York City in the Football Conference North at the beginning of this month playing his first game in the two-one FA Cup loss away at Swindon at the weekend.

Rotherham Boss, Paul Warne, has mentioned in the last couple of weeks that he’s expecting ‘some players’ to leave in January – would we be surprised if any of the above were amongst them?