We Aren’t Really In A Bad Place Are We 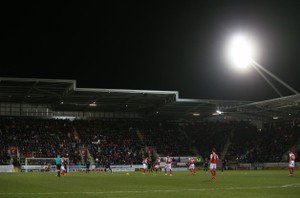 Rotherham United Manager Paul Warne told iFOLLOW that his Millers team can play a lot better than they did on Tuesday night.

The team that Warney is picking for our league games are mostly the same set of players who we had last season. Most of them were young lads last year and learned their jobs well. Most of them have had around twelve months together now and I don’t think there’s anything better for a football team than keeping the same lads in the squad. But, we are playing better players. Some of the players in the Championship have played in the Premier League – and we’ve yet to face the three sides who were relegated (although Stoke City aren’t fairing too well at the moment).

Warney has tried different combinations – two up front he feels doesn’t work, four-four-two he thought wasn’t the way to go while four-one-four-one he thought was about right for the Millers.

We’ve all had a little moan and wondering why he’s not starting with two up front but looking at a lot of the teams in the Championship, to be fair, not many of them do.

As it stands today we are in nineteenth place with three points. This time last season in League One we were fifteenth with the same number of points BUT in League One.

We might not get any higher than nineteenth for the rest of this season – but, on the other hand, we might not go any lower.

And life at the New York Stadium isn’t that bad is it. OK the seats could do with a wesh (that’s Yorkshire speak) and on the first day of the season they ran out of programmes but looking at the bigger picture we are ‘little’ Rotherham United and we had a great day out at Wembley to get where we are today, competing in the Championship in a stadium that we are all proud of.

I, for one, think this is a step in the right direction. Let’s enjoy it.