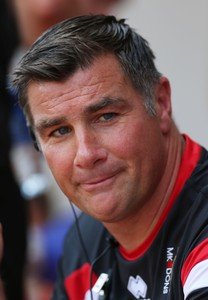 Rotherham United’s Assistant Manager Richie Barker said that he was ‘immensely proud’ of the players today despite losing two-one at home to Norwich City.

Saying that it was four things – missing a penalty, giving away a penalty, scoring an own goal and having a man sent off – that lost the game today, Richie told the Official Site that the players, ‘stuck to the game plan’ saying, ‘My biggest regret is that there wasn’t a packed crowd to watch it because I thought we played some excellent stuff.’

And we did. We got some good crosses in, we created and defended well and our players didn’t do a lot wrong. But, today, neither did Norwich City. And that’s what made it a good game.

‘Freddie’s not missed the penalty on purpose,’ said Richie, ‘Icky (Michael Ihiekwe) hasn’t scored an own goal on purpose and Angus (MacDonald) had a rush of blood.’

But that is part and parcel of football isn’t it. Of course we know none of these players wanted to do what they did. It was unfortunate for them – and damn disappointing for us fans – but it happens.

I thought most of the players were on top form and thought Jamal Blackman had a really good game. If I had a Man of the Match it would possibly be him or Shaun MacDonald, I was sorry to see him make way because of the red card.

A bit more luck – the penalty shout after Norwich scored their second goal for instance had that been given, well who knows what would have happened.

As it is we have to shake ourselves out of any self pity (that includes us fans) and get ready for the trip to the City Ground on Tuesday night to take on Nottingham Forest.