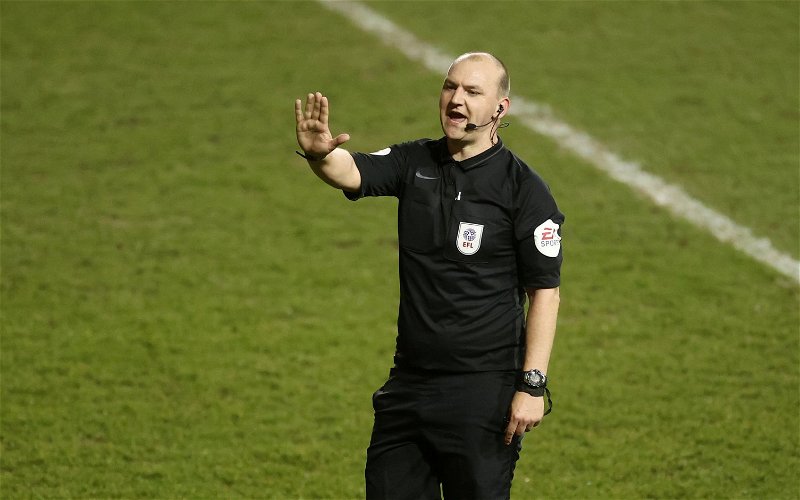 Rotherham United travel to the Stadium of Light on Tuesday to take on Sunderland when the referee is Robert Madley from West Yorkshire.

Robert began refereeing in 2002 having progressed through the West Yorkshire League and Contributory League System. He was promoted to Panel Referee in 2008 and spent a season in the Premier League as as Assistant Referee before being promoted to the Football League Referee’s List in 2010. After spending three years in the Premier League personal reason’s saw him move to Norway where he officiated in their lower leagues before he came back as a League referee for the 2020/1 season.

This will be the third time Robert has had the whistle for a Millers game the first being in October at the New York Stadium when Wycombe were the visitors and who he missed falling down a every five minutes. The game was goalless with Robert giving out three yellow cards, one each for Shane Ferguson and Ollie Rathbone and one for the visitors. He was then in the middle for our Papa John’s Trophy game away at Hartlepool when Michael Smith equalised twice to take the game to penalties which saw Rotherham into the Final at Wembley.

The first time Robert was in charge of a Millers game was in January 2012 at Don Valley when Bradford City were the visitors. Lewis Grabban opened the scoring on sixty-three minutes and made it two-nil five minutes later from the penalty spot after Jon McLaughlan rushed out of his area and bowled Sam Wood over when he was clean through on goal. On seventy-one minutes Brett Williams replaced Chris Holroyd and three minutes later he unleashed a shot that McLaughlan didn’t know how to deal with, first thinking he would punch then deciding to try and catch it while back-peddling, did neither and the ball went into the back of the net to make it a three-nil victory to the Millers.

He was then in the middle for a League Two game with York City at the New York Stadium in February 2013 when City went in front on sixty-three minutes with a Matty Blair goal only for Daniel Nardiello to grab an equaliser for the hosts four minutes into time added on.

The Millers and Robert last met at Stadium:MK in a League One game in October 2013 when it looked to be going into half-time goalless until Michael O’Connor saw red for fouling Stephen Gleeson in the box with Shaun Williams scoring the resulting penalty two minutes into time added on. Millers’ Manager Steve Evans was also sent to the stands for the second half. Ben Reeves made it two-nil to the hosts on sixty-six minutes but a Lee Frecklington header and an own goal saw Rotherham equalise. But a stunning goal from Patrick Bamford gave the Dons the win in the final minutes of the game.

This season Robert has been in the middle for thirty-six games and has shown a whopping one hundred and one yellow cards and six red cards.

Running the line on Tuesday night we have Hristo Karaivanov and Robert Atkin and the fourth official will be Ross Joyce.