Ref Watch – Millers Away At Luton 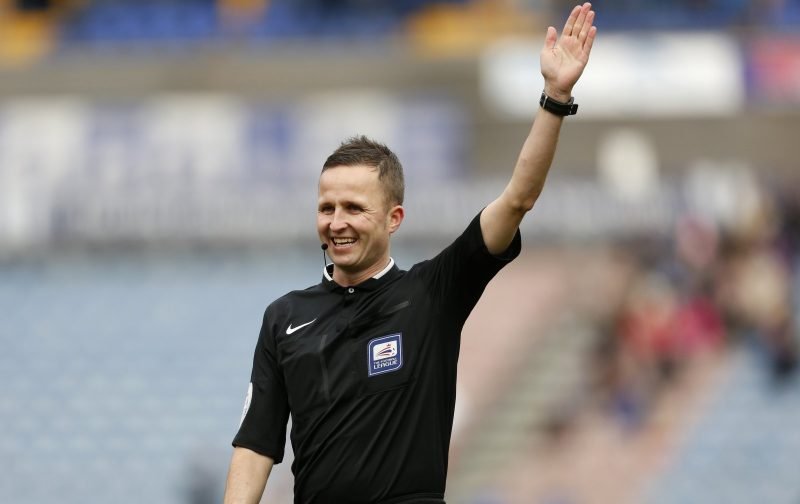 Rotherham United travel to Kenilworth Road on Tuesday night to take on Luton Town in this re-arranged game when David Webb from Lancashire is in charge.

This is the third time time David has been in the middle for a Millers game this season, the first being in October when Norwich City were the visitors to the New York Stadium. Freddie Ladapo opened the scoring for the hosts on three minutes but an own goal from Michael Ihiekwe saw the visitors level on the sixty-eighth minute. Things went downhill even more for the Millers three minutes later when a poor challenge on Oliver Skipp saw Rotherham go down to ten men as Angus MacDonald saw red. As the game went into time added on Buendia went down under a challenge from Florian Josefzoon and Mr Webb awarded a penalty which Hugill put into the back of the net. Then he was at St Andrew’s Stadium when we took on Coventry City in a game that saw City two-up in twelve minutes, the first from Maxime Biamou with Tyler Walker scoring the second. Leo Ostigard saw a header hit Michael Smith and make it three-nil on seventy-two minutes with Rotherham pulling one back from the penalty-spot with five minutes to go which Kyle Vassell won and Dan Barlaser stepped up to take.

David has been in charge of a few Millers games in the past including one at the Kassam Stadium in January 2020 against Oxford United. Two goals from Kyle Vassell and one from Richard Wood gave the Millers a three-nil lead going into half-time and while Marcus Browne got a second half goal for the hosts the Millers took all three points.

The season before saw David in charge of Rotherham a few times – the first at the end of September against Stoke City at the New York Stadium which was a two-all when a Ryan Manning penalty and Richie Towell goal gave the Millers a two goal advantage but the Potters got a point thanks to goals from Tom Ince and Bojan Krkic. The first time we met David last season was in August when a Michael Smith goal in the dying seconds of the game gave the Millers all three points at home against Ipswich Town. He was also in the middle for our game in November that season at Ewood Park which ended one-all after Michael Smith had put the Millers in front in the final fifteen minutes Blackburn equalised five minutes later with a goal from Bradley Dack. The last time that season which saw David meet the Millers was in March at Loftus Road when Semi Ajayi put the visitors in front on seventy-one minutes only for Bright Osayi-Samuel to equalise for Queens Park Rangers five minutes from time. But in five minutes of time added on Ajayi was there to head home an Anthony Forde free-kick to give Rotherham their first victory over QPR for sixty-eight years.

He was also in charge at the New York Stadium in March 2016 in a game that saw six goals. Visitors Derby County went three-nil up with second half goals from Tom Ince (two) and Chris Martin. With seven minutes of the game left Danny Ward got what looked like a consolation goal for the hosts but Leon Best, who had come off the subs bench on sixty-nine minutes, made it first three-two then got a final minute goal to give Rotherham a point.

Before that David was at the New York Stadium was in January 2013. Bristol Rovers were the visitors and the game was only ‘on’ after two hundred fans, from both sides, helped clear the pitch of snow. Claude Davis was making his debut and what a debut it was! In the opening ten minutes David Webb gave him a yellow card and two minutes before half-time he gave a penalty away which Lee Brown duly put away. On the stroke of half-time Claude got a second yellow cards and the Millers spent the whole of the second half with ten men. On fifty-two minutes Rovers went two up when Ellis Harrison scored and ten minutes later Joe Anyinsah made it three. Seventeen minutes from time David Noble, on for Lee Frecklington, got a consolation for the hosts. Earlier that season David was in the middle for our nil-nil draw against York City at Bootham Crescent.

The season before the Millers entertained Derby County at Don Valley which saw Gary Teale put the Rams one up on eleven minutes. Paul Warne got an equaliser for the Millers a minute before half-time with a sixty-fifth Kevin Ellison goal giving them the win. David showed just one yellow card that day which was to Paul Connolly of Derby. Later that season he was in charge of our game at Gigg Lane which Bury won two-one. Kevin Ellison put Rotherham in front on the stroke of half time but three minutes into the second half Ryan Lowe equalised with Richard Baker giving them the win six minutes from time
.
April 2009 saw David in the middle for our game at Millmoor against Shrewsbury Town. The Shrews went in at half-time one up after a goal from Nick Chardwick with Ryan Taylor getting an equaliser for the hosts on seventy minutes. Unfortunately for the Millers six minutes later an Ian Sharpe own goal gave the visitors all three points.

David’s first time in charge of a Millers game was the second League game of his career in August 2008. Chester City were the visitors at Don Valley and with the Millers needing as many points as possible to get to nil, after starting on minus points, it was Ian Sharps who opened the scoring on just two minutes. Reuben Reid made it two-nil on fourteen minutes but they were pegged back to two-one four minutes later when Kevin Ellison, then with City, pulled one back for the Blues. On twenty-seven minutes Alex Rhodes made it three-one and that’s how it stopped and brought the Millers to minus-eight points.

This season David has shown eighty yellow cards in the thirty-four games he has been in charge of and four red cards.

Running the line on Tuesday night we have Lee Venamore and Adam Crysell with Andy Woolmer named as Fourth Official.

6 Replies to “Ref Watch – Millers Away At Luton”