Ref Watch – Millers Away At Ipswich 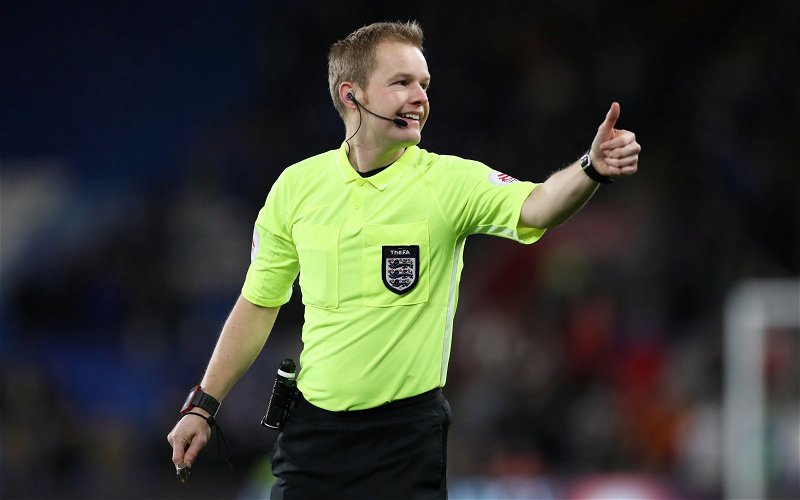 Rotherham United travel to Portman Road on Tuesday night where they meet Ipswich Town in the next League One outing when the referee will be Gavin Ward from Surrey.

Gavin joined the list of Assistant Referees at the start of the 2002/3 season progressing to the National List of Referees in 2007, when he officiated in the Euro 2008 qualifying game between Denmark and Liechtenstein in the September.

February this year was the last time Gavin and the Millers met at Deepdale in a Championship game. A Joe Rafferty own goal gave Rotherham the lead in the opening minute which they doubled ten minutes into the second half thanks to Ben Wiles. Preston pulled one back on the sixty-fifth minute with a goal from Ched Evans but the Millers held on for all three points.

Earlier last season Gavin was last in the middle for a Rotherham game when the Millers travelled to Watford when two goals in the first quarter-of-an-hour of the game gave the host all three points. Billy Jones and Michael Ihiekwe saw yellow that Tuesday evening.

The time before that when the Millers and Gavin met was in October 2018 at the New York Stadium which was a goalless draw with Bristol City and in September 2017 in League One at Portman Road when a Jon Taylor goal on the thirty-sixth minute gave Rotherham a win over Ipswich Town and former Boss Kenny Jackett.

He was in charge of a Millers match was in February 2015 when Ipswich Town were the visitors to the New York Stadium. Matt Derbyshire put the Millers ahead on the thirty-eighth minute with a Conor Salmon goal on sixty-four minutes making it two-nil to the hosts. Zeki Fryers, who was on loan from Crystal Palace, saw yellow for the Millers that day. A month after the game Zeki joined Ipswich on loan until the end of the season and just over a year later in March 2014 for our two-one win over Bristol City. James Tavernier opened the scoring on just two minutes but Wade Elliott equalised for the Robins three minutes into the second half. On the hour mark another goal from Tavernier gave the Millers all three points. That season we also had him officiate our three-nil loss to Crawley Town in March.

The season before Gavin had been in the middle for our FA Cup game at the EEB Stadium against Aldershot. A hat-trick from Danny Hilton for the hosts gave them a three-nil lead before Mr Ward gave the Millers a penalty which Lee Frecklington put away. Kari Arnason (84 minutes) and Hylton (85 minutes) saw red cards that day.

September 2011 saw Gavin at Don Valley which saw the Millers beat visitors Dagenham and Redbridge three-one. Gareth Evans opened the scoring on eight minutes only for Scott Doe to equalise thirteen minutes later. Two goals from Lewis Grabban before half-time gave the Millers the win. Marcus Marshall of the Millers and the Daggers’ Damien McCrory were booked that day.

A goalless draw away at Brentford was the game Gavin was in charge of in August 2008 with the only card of the day being a yellow for Rotherham’s Reuben Reid.

Gavin’s first time in charge of a Rotherham game was at Millmoor in December 2007 where he sent off Matty Crowell of Wrexham on fourteen minutes for a two footed lunge at Millers loanee, Ian Ross. Five minutes before half-time Derek Holmes put the home side in front, getting a second on seventy-two minutes. Marc Newsham pitched in with a third ten minutes from time to give the Millers a well deserved victory.

This season Gavin has been in the middle of fourteen games showing fifty-five yellow cards and two red cards.

Running the line on Tuesday night will be Adam Crysell and Nigel Lugg with the Fourth Official being Paul Howard.