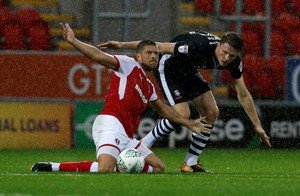 The twenty-six year old was wiped out of most of last season with a knee injury and things were looking up and he had made nine appearance before a groin injury saw him play just forty-five minutes away against Nottingham Forest in September. Jamie signed a a new deal in October keeping him at the New York Stadium until 2021 and has made three appearances off the bench since then.

Playing the whole ninety minutes on Tuesday afternoon, which saw the Millers win four-one with goals from Jacob Gratton, Ben Wiles (two) and an own goal, must surely mean he’s very much on the mend and could be in Millers Manager Paul Warne’s thoughts to start up front with Michael Smith for our South Yorkshire derby on Saturday when Sheffield United are in town.

If he’s fit would you start Procts on Saturday? Or would you wait another game or two?