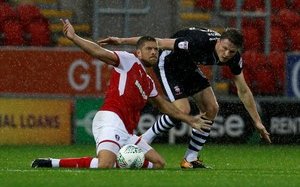 After surgery to an anterior cruciate ligament, the twenty-six year old spent a year on the sidelines getting fit and proved last night that he’s about ready to lead the Millers front line again.

He started a little slowly but got better as the game went on and scored twice in the Millers three-one win over Wigan. Obviously, he did tire and with ten minutes to go was subbed getting a standing ovation from the Millers crowd at the New York Stadium.

And what proves that this Rotherham team are all-in-it-together was when Procts hit his first goal of the night not only the fans were on their feet cheering but the players in the dugout were up delighted for him too. And when he came off they were also on their feet.

Telling Radio Sheffield that he’d have liked to have played the full ninety minutes, Procts said, ‘It was just about getting minutes tonight. Getting a couple of goals is brilliant and the win for the lads is a good start for me to come back to.

‘I think we were organised and sat behind the ball quite well. That’s what we are going to have to do this season and take the chances when they come.

‘It was disappointing for me to lose a year, that’s a long time in football and the win tonight will help me move forward.’

He says he came through the game well and has had no reaction (although I think he might be feeling it this morning!) I suppose the question is now ‘will he play at Leeds on Saturday’? I’d be surprised if he starts but perhaps a cameo off the bench might be on the cards.