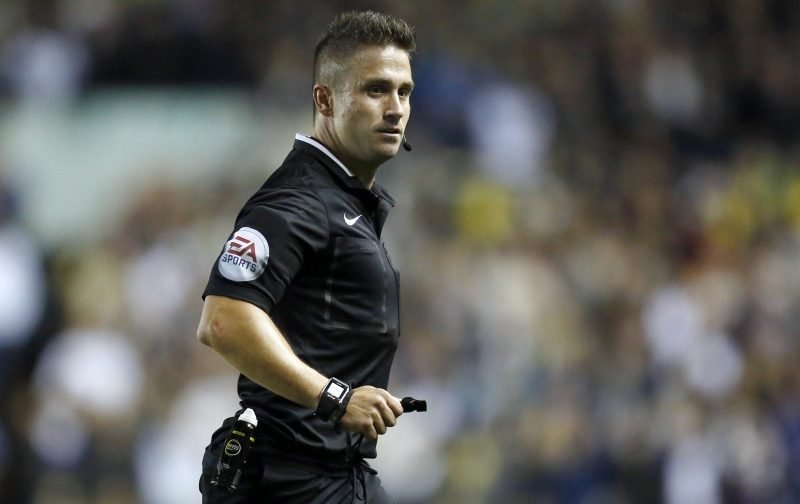 New Years Day 2020 sees Rotherham United at home with Blackpool the visitors at the New York Stadium and James Adcock from Nottinghamshire with the whistle.

James is an accomplished referee in the Premier League down to League Two and this is the seventh time that James has been in the middle for a Millers game the last time being January 2016 in our home Championship game with QPR. Going in goalless at half-time second half goals from Junior Hoilett, Matt Phillips and Sebastian Potter gave the visitors all three points with the only booking of the game going to the Millers’ Shay Facey.

The time before when James was in the middle for a Rotherham game was in March 2015 at the New York Stadium when Cardiff City were the visitors. Cardiff scored three goals in an eleven minute spell of the first half – from Bruno Ecuele Manga, Federico Macheda and Conor McAleny – with Danny Ward getting a consolation for the hosts ten minutes from time. Paul Green was the only player booked that day.

A cold Tuesday night in February 2014 at Deepdale saw him in the middle for our game with Rochdale. Lee Frecklington put the Millers one up on seven minutes and four minutes later an own goal from Tom Clarke made it two-nil to the visitors. Craig Davies pulled one back before half-time with Paul Gallagher and Joe Garner making it three-nil to Preston North End. With it looking like the Millers would be going home pointless up popped Lee Frecklington to get his second and the Millers equaliser. That night James showed yellow cards to Joe Garner of Preston and to the Millers’ Nicky Adams.

Earlier that season James was in the middle for our FA Cup win over Bradford City at the New York Stadium when two goals from Kieran Agard and one from Alex Revell gave the Millers a second round tie with Rochdale. That day Kari Arnason and Mark Bradley saw yellow cards for the Millers with Rory McArdle getting one for the visitors.

James’ first game in charge of the Millers was at Don Valley in August 2011 when Gillingham were the visitors. The game was nil-nil at half-time but goals from Danny Harrison, Lewis Grabban and Gareth Evans in the second half gave the Millers all three points.

Three months later James was in the middle for our first round FA Cup game away to Barrow at Holker Street. Barrow went ahead on sixteen minutes from a Paul Rutherford goal and it was the non-league side who were very much on top for most of the game. On eight-two minutes a Tom Newey cross fell to Lewis Grabban, who to the world and his father looked to be in an off-side position, but seeing no flag the Millers striker carried on and smashed the ball into the top of the net. Five minutes later with the ball flying around the penalty area Mr Adcock deemed that Barrow midfielder Paul Smith had handled the ball and gave a penalty to which Grabban said ‘thank you very much’ and gave the Millers a two-one win taking them to a second round tie with Shrewsbury Town.

In the twelve games James has been in the middle for this season he has shown thirty-eight yellow cards and three red cards.

Running the line for the first game of 2020 we have Lisa Rashid and Alix Pashley while the Fourth Official will be Declan Ford.