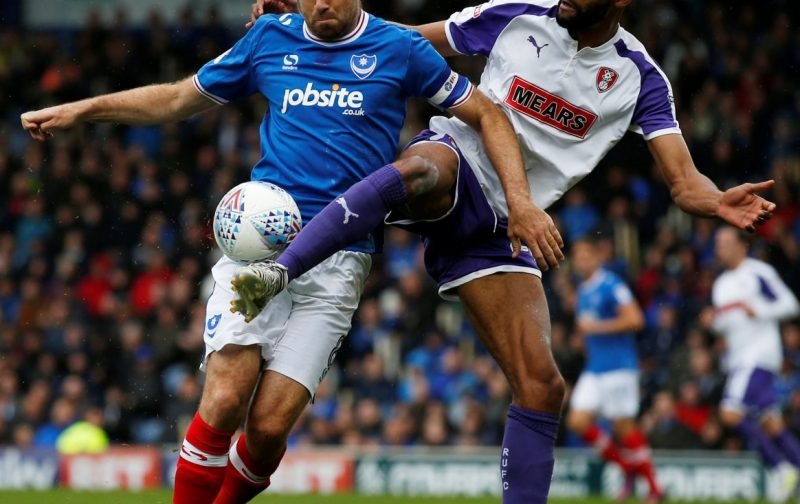 Rotherham United lost their first game of October this afternoon to an Oxford United side who looked, in my humble opinion, in control for much of the game.

The Millers started well when Matthew Olosunde got on the end of a Matt Crooks pass to cross in only for U’s midfielder Alex Rodriguex-Gorrin to deflect the ball to safety. On six minutes Daniel Iversen came into his own when a looping cross from James Henry was heading towards the waiting Tariqe Fosu-Henry with the Millers’ ‘keeper getting there first. Ten minutes later the visitors got a corner which was only half cleared as far as Henry who shot wide before some great work from Jake Hastie saw him work his way past three white-shirted players only for his shot to come to nothing. Michael Smith and Hastie combined a minute later the latter winning his side a corner which Henry found easy to head away. On sixteen minutes football took a back seat with all the stadium standing giving a round of applause in the memory of a young Millers fan, Charlie Hunter, who recently sadly passed away at the age of sixteen. On twenty-three minutes the visitors went ahead after Cameron Brannagan won the ball off Olosunde he sent it to the feet of Fosu-Henry who sent the ball into the corner of the net giving Iversen little chance. The Millers nearly equalised straight away when a shot from Hastie didn’t look to be going near until Chris Cadden appeared to divert it back towards goal then looked to all in the stands like he’d hand-balled it on the line with referee Oldham shaking his head, although as he wasn’t up with play how he could have seen that I do not know. At the other end Iversen again had to be on his toes after Josh Ruffles sent the perfect ball to Brannagan whose shot saw the Millers’ ‘keeper save with the lower part of his legs with the following corner finding the head of John Mousinho who headed over. On the thirty-fifth minute Michael Ihiekwe set off from his own half playing the ball to Smith who in turn found Crooks who saw Ihiekwe had made it into the box, sending the ball towards his head and the Millers defender got the better of Henry to get the equaliser. Ihiekwe’s goal was celebrated by the fans as he had to have treatment but was soon back on his feet and back on the pitch to thunderous applause. At the other end Iversen held onto a shot from Henry before Ihiekwe set off again on another run only to be stopped by Matty Taylor (who had actually stayed on his feet). In the final minute of the half a super flick from Smith found Crooks but some top defending from Cadden stopped him getting a shot away.

The second half began slowly with the first Millers attack getting a corner which Jake Hastie took sending the ball in just missing the head of skipper Richard Wood. But it was the visitors who took the advantage when although it looked like Josh Ruffles had fouled Ben Wiles, referee Oldham didn’t react and the ball found Cameron Brannagan who must have thought it was his birthday when first Matthew Olosunde then Michael Ihiekwe appeared to lose their footing, he crossed the ball into the box and despite Daniel Iversen getting his hand to it Matty Taylor headed home. A couple of minutes later it might have been three when James Henry looked to be one-on-one with Iversen only for Jamie Lindsay to get a perfect tackle in to stop him in his tracks followed by a brilliant save from Taylor by Iversen, although the flag had gone up for offside. As we were having a second round of applause of the day, this time for a departed U’s fan, the Millers made their first substitution fetching on Chiedozie Ogbene for Dan Barlaser. Iversen did well with twenty minutes to go to get down to a Fosu-Henry shot followed by Matt Crooks making way for Carlton Morris while the U’s brought on Shandon Baptiste for Mark Sykes. Minutes later Julien Lamy came off the bench for the hosts with Jake Hastie going the other way which was followed by a chance for the Millers when Joe Mattock sent in a cross towards the far post only for it to hit a defender before Morris could get on the end of it. A push on Richard Wood saw Matty Taylor get the first yellow card of the day and that was his last action as he was subbed with Jamie Mackie coming on in his place. A good ball from Morris landed at the feet of Smith but he appeared to stumble a little and an Oxford defender got it away from danger. A superb ball in from Lamy couldn’t find a red shirt but was put out for a corner which came to nothing. As the board went up for three extra minutes (really, only three when it took their subs an age to get off the pitch?), Olosunde set off at pace and got into the box hitting the ball low only for Simon Eastwood in the Oxford goal to make a great save. The visitors last substitution saw Sam Long on for James Henry. In the final minute of time added on Iversen sent a long ball up-field to Ogbene who crosses into the box finding Morris but his header didn’t cause a problem.

As I said at the start of the report I thought Oxford were the better team – more organised, better in defence – but the Millers did have chances and did have periods of the play although some of the passing wasn’t the best.

Let’s hope we travel well on Wednesday to Ipswich and we get something from that mid-week away game.

Referee – Scott Oldham (and, yes, I am still shaking my head as I type his name).