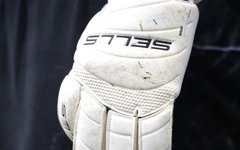 Rotherham United are obviously after a goalkeeper and a lot of us fans thought we might be able to get Daniel Iversen back from Leicester City, for a second loan spell, especially as we will be in the Championship for the coming season.

And, of course, we might still do that although Alan Nixon has hinted on his Twitter account that we could be looking at Arijanet Muric of Manchester City.

The twenty-one year old spent the latter part of his Youth career with City signing a three year extension with them in the summer of 2017. Arijanet played in three Football League Trophy games including one against the Millers at the New York Stadium which City won on penalties.

The following year he went out on loan to Dutch side NAC Breda although was recalled as cover after just one game playing in a handful of Trophy and Cup games.

Last season he was sent out on loan to Nottingham Forest but was only ever second choice playing just four games.

Although born in Switzerland and playing for the U21 Montenegro side, Arijanet now plays for the Kosovo First team playing twice against England last season in the European Championships.

To be honest I think the only thing going for him, as far as a Paul Warne player is concerned, is his age. He doesn’t seem to have the consistency that our Manager will be looking for.