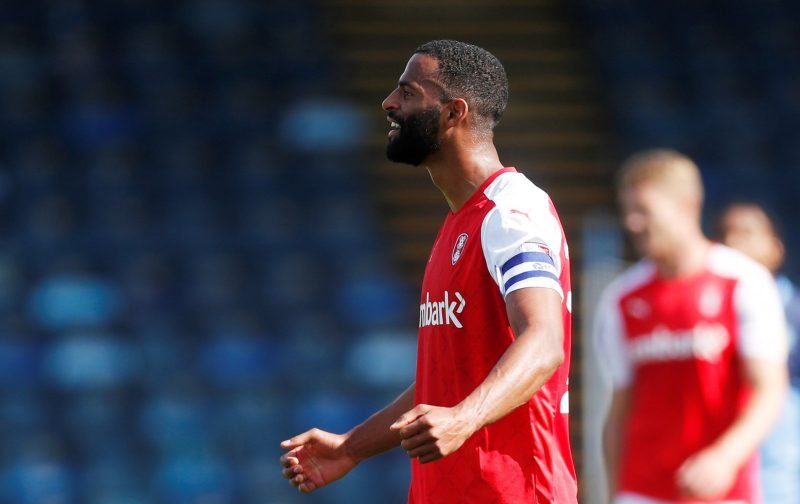 After a goalless first half the game saw four second half goals with the Millers leaving it late to get a draw.

The hosts started well and only a timely interception by Wes Harding saw him put the ball behind after Matt Done crossed inside the penalty area. And it was Done again who got the ball to Alex Newby who in turn tried to find Jake Beesley but the striker didn’t get there and the ball went wide. At the other end Freddie Ladapo sent Kieran Sadlier on his way with the nippy winger sending a ball in for Harding but the Jamaican International couldn’t quite get there. Rotherham had to stand tall when a corner came in for Dale but was eventually dealt with before a shot from distance by Aaron Morley whistled past the upright. Nice work from Mickel Miller saw him force a corner for the visitors which came to nothing as did a free-kick from Sadlier some minutes later. Viktor Johansson in the Rotherham goal did well to get down to a shot from Done before Harding collected a good ball from Sadlier only to put it over the crossbar. A Millers corner on the half-hour mark was defended well by Oliver Rathbone before Jake Hull got the better of Beesley to put the ball out for a corner at the other end. A second corner saw Newby collect the ball and bring off a great save from Johansson. A chance for Rotherham came from a Rochdale corner in the final five minutes of the half which Ladapo sent to Dan Barlaser who found Ben Wiles in the area but the midfielder headed straight at Dale ‘keeper Jay Lynch.

Both sides started the second half with a change Rochdale fetching on a Trialist for ‘keeper Jay Lynch and Michael Ihiekwe on for Jake Hull for the Millers and it was Ihiekwe who came close from a short corner but his header wasn’t strong and the trialist goalie easily caught. Another change for the hosts saw Matt Done make way for Abraham Odoh. Joe Mattock was on hand to cut out a pass from Aaron Morley before it could reach Alex Newby. Freddie Ladapo was the next one to test the trialist ‘keeper but his shot went straight into the goalies waiting arms. Changes for Dale saw Eoghan O’Connell and Jimmy Keohane replace a Trialist and Jimmy McNulty. On sixty-five minutes Mattock gave away a penalty with which Jake Beesley gave the hosts the lead. It should have been one-all a minute later when some good work from Mickel Miller found Freddie Ladapo in a good place only for the Millers’ striker to see his effort brilliantly cleared off the line by a trialist. With twenty minutes to go the hosts doubled their lead when Newby sent the ball to Beesley whose shot from just inside the area flew into the back of the net. The visitors made four changes fetching on Michael Smith, new boy Shane Ferguson, Jamie Lindsay and Chieo Ogbene for Kieran Sadlier, Freddie Ladapo, Dan Barlaser and Mickel Miller while Rochdale put Stephen Dooley and Ethan Brierley on for Oliver Rathbone and Aaron Morley. Rochdale might have made it three had a curling effort from Odoh found the target instead of going inches wide. Some good work from Wes Harding saw his long pass find Smith who set Richard Wood up but the Millers’ captain couldn’t keep his shot down. A trialist for the hosts made way for Joe Dunne. Rotherham halved the scoreline when Ogbene flew into the area and saw his curling ball find the corner of the net. Conor Grant came close for Dale seeing his initial shot blocked but getting a second chance saw Viktor Johansson keep it out. Jacob Gratton came off the bench for the visitors with Joshua Kayode going the other way. In the final minute of the game the Millers got a free-kick which was taken by Ferguson and headed in by Ihiekwe to make it two-all.