How Has March Been For The Millers 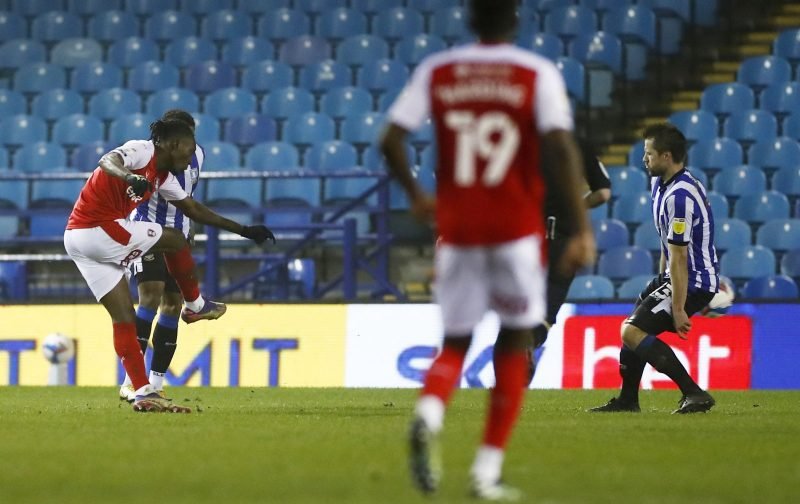 The month of March has been, for all clubs in the top two tiers of English football, a short month although, to be fair, it was even shorter for Rotherham United.

It started brilliantly. A short trip to our local rivals and neighbours Sheffield Wednesday saw Michael Smith put the Millers ahead on seventeen minutes with a header after a ball from Florian Jozefzoon, getting a rate start, found him. A refereeing error saw Smith red carded on sixty-six minutes, which was rescinded not twenty-four hours later, with the hosts making it one-one with eight minutes to go through an unfortunate bounce which went in off Matt Olosunde. With it looking like it would be a point apiece, a poor corner for the Owls saw Matt Crooks pick up the ball and with a fantastic cross find substitute Freddie Ladapo and with John Breckin shouting ‘make a name for yourself Freddie’ from the commentary box the six foot striker did just that scoring a magnificent winner sending Millers watching in their living rooms absolutely barmy!

And that was the last game Rotherham took part in for thirteen days after players and staff were struck down with Covid-19. It was reported that we had as many as twenty-five cases although it has been said since that it was probably more like twenty. Games against Brentford, Luton Town and Coventry City were postponed while the training ground was closed and players and staff isolated.

The first game back saw a depleted and, quite honestly, ill looking Rotherham side take on high flying Watford. It would have been difficult with a fit eleven and when Francisco Sierralta put the Hornets in front on nine minutes I think all us Millers fans feared the worst.  Ismaila Sarr and Ken Sema made it three with Michael Smith missing from the penalty spot around the hour mark before another good strike from Freddie Ladapo made it three-one. But a minute later Watford had the ball in the net again when Dan Gosling went straight up the other end to make it four-one. Paul Warne watched this game from his back garden shed as he was in self-isolation with his number two Richie Barker admitting it has been a difficult night.

Rotherham were back on their travels this time to Ashton Gate to take on Bristol City who were having a bad time of it at home, again without the Gaffer. Although the Robins started the better and goalkeeper Viktor Johansson was the busier of the two it was the Millers who scored first with Michael Smith meeting the brilliant cross of Wes Harding heading past home ‘keeper Daniel Bentley for his hundredth league goal. And Rotherham came out fighting in the second half with a couple of chances going begging while Johansson did his job well at the other end. On seventy-three minutes a Dan Barlaser corner flew into the area with Richard Wood (or maybe a City defender) heading in to give the Millers a two-nil away victory.

Two Millers players, Wes Harding and Curtis Tilt were called up for the Jamaica National side to play a friendly with the USA, with Tilt, who is on loan at Wigan, coming off the bench in a four-one loss.

So, if you look at the stats of six points from three games they don’t look bad at all do they – two away wins, one home loss. But, of course, the Millers are still in the bottom three of the Championship but we have pulled it back to just being three points behind Birmingham, in the place above, while we have four games in hand of them (although, of course, we need to win most of them) and have a much better goal difference – minus nine to minus twenty-two.

April is going to be massive for Rotherham United. We will probably need as much luck as good football and, if you are of the inclination, prayers wouldn’t go amiss either.