How Did January Go For The Millers 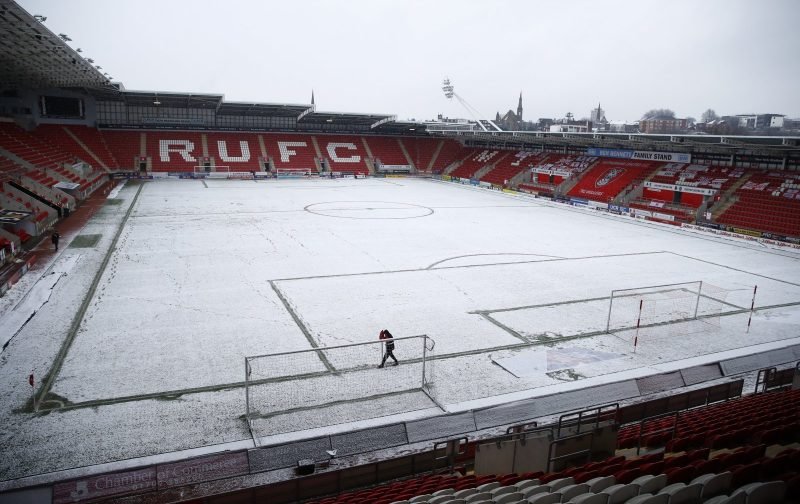 So how did January go?

Well it started with snow and although it was a late call the game at the New York Stadium against Cardiff City was called off in the interest of player safety after snow had come thick and fast.

So Rotherham United’s first game of 2021 was an FA Cup tie at Everton, one which not even the most ardent of fan could have thought we’d have won. We didn’t win. But, by golly we gave the Toffees a game. I think we feared the worst when Cenk Tosun put the hosts in front on just nine minutes but the Millers got stuck in and forced Everton ‘keeper, Robin Olsen, into saves before Matthew Olosunde equalised. VAR played it’s part and denied Tosun a second before the game went to extra-time. And that was just a bit too much for the Championship side with Abdoulaye Doucoure getting the winner for the Premier League side.

Throughout January the Millers were being linked with various players – mostly agent speak we think.

On the back of the good performance at Goodison Park the Millers went to Derby brimming with confidence although Wayne Rooney had been given the Manager’s job at Pride Park on a permanent deal. Richard Wood had a goal disallowed for off-side, which the Millers captain still disputes, and the Millers had shots saved on the line but eventually some good work from Michael Ihiekwe found Dan Barlaser whose shot came off the post to Jamie Lindsay who gave the Millers a one-nil win.

Mickel Miller joined Northampton Town on loan and Kyle Vassell moved to Fleetwood Town until the end of the season.

Next up for the Millers was Stoke City at the New York Stadium – a game which saw six goals. An unfortunate own goal from Angus MacDonald gave the Potters the lead on fourteen minutes with Matt Crooks equalising just after the half-hour mark as the rain poured down. Michael Smith put the Millers in front six minutes into the second half but Danny Batth headed an equaliser for the visitors. Again Rotherham went in front, a lovely shot from Crooks but City got a third thanks to Nick Powell to give both teams a point.

Millers Manager, Paul Warne, said he enjoyed the game saying the second half performance of his team was amazing. Michael O’Neill, Manager of Stoke, wasn’t so happy saying each of the Millers goal was ‘poor’ from Stoke’s point of view.

The ones who did make a big hit that evening were the Millers iFollow Millers commentary team, who the Stoke fans also had to listen to, with some of the Potters fans asking if Matt Goodwin, John Breckin and Les Payne could be transferred to Stoke!

As the Millers sent defender Billy Jones out on loan to Crew Alexandra, Paul Warne said he really needed to recruit. Five days later in came left-wing back Ryan Giles on loan from Wolves.

Giles started on the bench for the next game which was away at Middlesbrough where Matt Crooks gave the visitors a deserved lead going into half-time. ‘Boro came out better in the second half but Michael Smith put a penalty away making it two-nil for the Millers before Giles came on and almost with his first touch of the game scored a great goal to give Rotherham a three-nil win.

‘We deserved our win,’ Paul Warne said while Neil Warnock didn’t think the Millers should have got the penalty but said ‘some of the chances we had to equalise were embarrassing.’

Amongst the good news of getting points on the board came the bad news that Chieo Ogbene had had a set-back in his recovery from a knee injury which has kept him out of the squad all season and was going to be out even longer.

Adam Thompson was the next player to leave Rotherham with the player and club mutually agreeing to cancel his contract.

The last game of the month was always going to be difficult with second placed Swansea City coming to the New York Stadium. A nice goal from Conor Hourihane put the visitors in front just before the half-hour mark and ten minutes later Matt Grimes doubled the lead from twenty yards out. Freddie Ladapo halved the deficit on the sixty-fifth minute and despite the Millers putting pressure on the Swans’ goal Jay Fulton flicked the ball into the net to give the Swans all three points after just coming off the bench.

Seven points throughout the month and a very good performance against a Premier League side in the FA Cup with just the stain of one loss although I think that was more ‘quality that told’ – not a bad January.