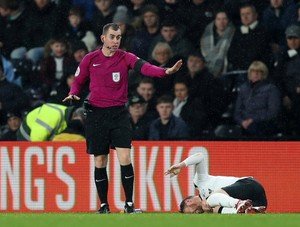 Rotherham United’s first cup game of the new season sees Peter Bankes from Merseyside in the middle against Wigan Athletic at the New York Stadium.

Last time Peter was in charge of a Millers game was at Bloomfield Road in December last year in League One. Blackpool went in front with a goal from Kelvin Mellor but two second half goals from David Ball gave the visitors all three points. Richard Wood, Michael Ihiekwe and Will Vaulks saw yellow for the Millers that afternoon.

He had also been in charge of our second round game at Huddersfield Town in this competiton in the August. Despite Semi Ajayi scoring for the Millers in the first minute, Huddersfield scored two in two minutes in the second half (a Phillip Billing penalty and a goal from Joe Lolley) to give the hosts a third round tie away to Crystal Palace.

Paul Hodskinsonfrom Lancashire and Staffordshire’s Robert Merchant will be running the line and the Fourth Official will be Andrew Madley from West Yorkshire.

Peter has shown nine yellow cards already in the two games he’s officiated in this season.