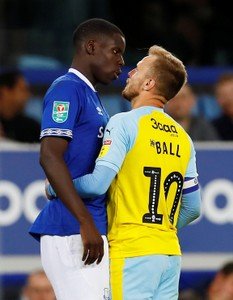 Rotherham United striker David Ball has joined West Yorkshire League One side Bradford City on a loan deal until the end of the season.

As the original paper work was submitted on 31st August the deal has been allowed to go through today.

David joined the Millers in the summer of 2017 from Fleetwood Town and played in the first game of last season against his former club.

His first goal for the Millers came against a Manchester City U21 side at the New York Stadium in the Football League Trophy Checkatrade game in August and he scored another eight goals last season in thirty-eight appearances.

In the League One Play-Off Final against Shrewsbury Town at Wembley in May David missed a penalty in the first half of the game.

This season the twenty-eight year old has made just three appearances two of which were in the Carabao Cup games against Wigan (at home) and Everton (away).

All at Vital Rotherham send our best wishes to David for the rest of the season.

2 Replies to “Ball Becomes A Bantam”