A Week Is A Long Time In Football 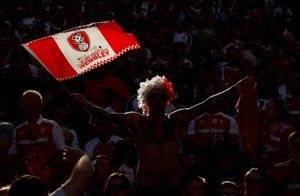 This time last week a lot of Millers fans were in seventh heaven getting ready to travel to the Stadium of Light – a first visit for many including me – on the back of a six-one home win over Bolton Wanderers.

The Saturday morning had left many of us knowing the Bolton game was something we should win but there was always that niggle in the back of your mind that this was the Wanderers first game under a new manager with a new team of players who would be ‘up for it’ with a few Millers being apprehensive at the beginning of the game and even more so when the visitors took the lead early on. But, things worked out well and the Millers had a great win and the fans went home happy and singing the praises of the players, finding it difficult to single out one for Man of the Match.

Last Tuesday night a thousand or so Millers fans were singing and chanting before the whistle and even after the set-back of Sunderland scoring in the opening minute those fans kept on dancing and singing. A penalty for the hosts put a temporary stop to that but when Daniel Iversen saved that spot-kick the fans were back singing and dancing againn and helped the Millers get a point at a difficult place.

Go forward to this Saturday just gone and the fans turned up at the New York Stadium with the expectation of another three points. Well, it didn’t work out like that and the singing and dancing was soon swapped for moaning and groaning as Shrewsbury put us to the sword a bit. It definitely wasn’t the game a lot of fans were expecting – it was slow, a bit drab with some of the refereeing decisions bringing more from the crowd than anything the team were doing which meant no encouragement from the terraces although we don’t know if that would have changed things or not.

After the game the moans kept on going – the ‘Warney Out’ campaigners started up again after they’d been quietened after the previous two games. Apparently the ‘starting eleven weren’t right’, ‘the substitutions weren’t right’ or ‘at the right time’. All this is just part and parcel of football which happens up and down the country week-in week-out.

As I was walking out of the stadium I stood and applauded some of the players as they came over to the fans after the goalless draw when a fellow supporter said, ‘you’re clapping a relegated side there’. Strangely He was stood next to me the week before also applauding.

My take on it all is that we had players out injured and we had had three games in eight days. I think some of the players looked tired against Shrewsbury. And, looking at the larger picture, I am of the mind that our squad isn’t large enough.

Let’s hope it’s a better game next Saturday and we will be singing and dancing again. If it’s not and we aren’t then maybe that’s the time to get stuck in and get behind the lads.

Meanwhile the game on Saturday, 26th October when Wycombe Wanderers are the visitors to the New York Stadium has been designated Kids For A Quid day.

2 Replies to “A Week Is A Long Time In Football”