A Quick Look Back At Last Season – February 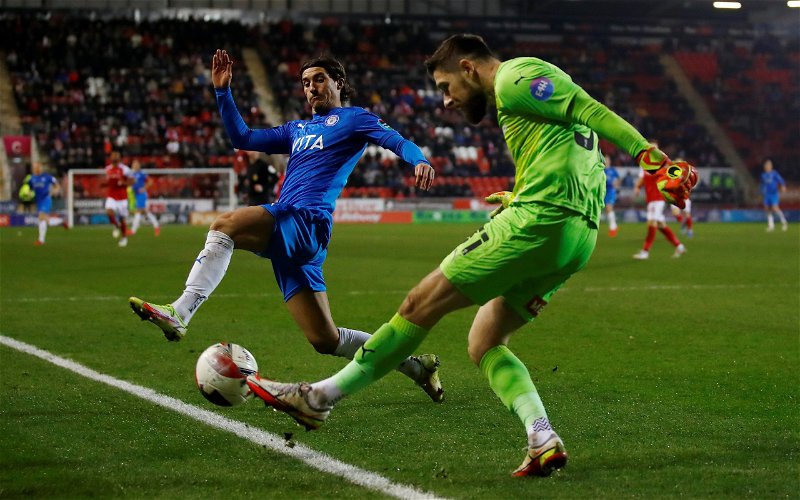 Rotherham United’s promotion to the Championship possibly didn’t go as smoothly as it could have so let’s have a quick look at how we got there.

The first day of the shortest month of the year was a South Yorkshire derby with the Millers making the short Tuesday night trip to the Keepmoat to take on Doncaster Rovers. The game was just eight minutes old when a Mickel Miller corner flew straight in over the head of  Jonathan Mitchell, the Rovers’ ‘keeper. Some lovely football from Michael Smith saw him find Ben Wiles who made it two-nil on sixteen minutes with Mitchell making a good save from Joe Mattock who was making his first league start since mid-October. Rovers had more of the ball at the start of the second half with a couple of half chances which only bothered their fans behind the goal. On the seventy-second minute Chieo Ogbene got himself to the corner of the box and curled a superb ball into the net to make it three-nil. Joshua Kayode was brought down in the penalty area by Joseph Olowu and Dan Barlaser made it four from the resulting spot-kick with substitute Jamie Lindsay made it five-nil a couple of minutes from time.

After the game Rotherham Boss Paul Warne said that he didn’t think the score line flattered the Millers.

Just after this game we found out that there were offers that came in for want away striker Freddie Ladapo but just as a loan.

Up next for the Millers was Accrington Stanley at the New York Stadium, which was the third game the pair had played in this season, Stanley winning two of them. So it was good for the hosts to get all three points with the only goal of the game coming on fifty-seven minutes from a wonderful Dan Barlaser volley. With four minutes to go Korede Adedoyin saw a shot blocked with referee Andy Woolmer stopping the game and going to consult a linesman. He marched back onto the pitch, showing Richard Wood a red card for handball and pointed to the penalty spot. Chaos reigned with Wood trying to protest his innocence and two Rotherham fans ran onto the pitch, one kicking the ball off the penalty spot and having an altercation with a Accrington player before Michael Smith grabbed them and they were taken away by stewards. The penalty was eventually taken with Harry Pell taking the kick and Josh Vickers making a great save.

Once again the club had to apologise for the behaviour of the so-called fans saying they were ‘ embarrassed to once again be commenting on the behaviour of some fans, who absolutely do not represent the majority or what we stand for as a club.’

On the road again for a Tuesday night game saw Rotherham’s next club away at AFC Wimbledon. The Millers came out the better side and when Will Grigg headed home from a Shane Ferguson free-kick on seventeen minutes it looked like they’d got what they deserved only for a lineman’s flag to put paid to that. It was the sixtieth minutes before the visitors could break down Wimbledon’s defence when a superb pass from Chieo Ogbene found Joshua Kayode who came off the bench just minutes who slotted the ball into the bottom corner for all three points.

Striker Michael Smith was nominated for January’s Sky Bet League One Player of the Month – and won it!

It was another South Yorkshire derby next for the Millers when they travelled to Hillsborough but there were injuries in the camp. Mickel Miller would be missing with a hamstring problem while a ‘severe’ hamstring problem wasn’t looking good for Will Grigg who had limped off the pitch on Tuesday night.

Sky TV were in residence for the Sunday lunch time kick-off which saw former Miller Jack Hunt get the ball into the net just after the half-hour mark but was judged to have been off-side. It was goalless at half-time but, to be honest, the hosts had had the better of the play. But on fifty-nine minutes the Millers won a corner which was headed on by Ben Wiles finding Freddie Ladapo who tapped home to give the visitors the lead. Chieo Ogbene won a free-kick in the final six minutes of the game which Dan Barlaser took sending it into a crowded box finding Michael Smith who curled the ball into the top corner of the net to make it two-nil and send the three and a half thousand Millers fans wild. It was Smith’s fiftieth goal in a Millers shirt while Jordi Osei-Tutu came off the bench for his debut.

Paul Warne admitted that he had to tell his team some ‘home truths’ at half-time after he was frustrated that his front two weren’t getting anything to feed off.

Back on home soil the Millers welcomed Wigan Athletic to the New York Stadium. Stephen Humphrys put the visitors in front on twenty-eight minutes and they had a goal disallowed in the second half for a foul on Millers’ ‘keeper Josh Vickers. Just minutes later the hosts equalised when Chieo Ogbene’s cross found Ollie Rathbone whose shot from distance found the back of the net. As the referee blew for full-time all four stands of supporters stood to applaud the teams.

‘It was a really exciting, entertaining game,’ Paul Warne said after the draw.

Managerless Morecambe were the next team to grace the New York Stadium pitch which saw a brace of goals first half goals from Freddie Ladapo giving the Millers a two-nil win.

A long trek down to Devon saw the Millers next game away to Plymouth Argyle. It was an end-to-end game and it was relief for all Rotherham fans when striker Michael Smith got his eighteenth goal of the season just after the hour mark.

Rotherham ended February still in top spot, nine points better off than second placed Wigan Athletic, who had two games in hand, and MK Dons who had played a game more than the Millers.

Vital Rotherham’s Man of the Month was, probably not surprisingly, goalkeeper Josh Vickers.