A Quick Look Back At Last Season – April 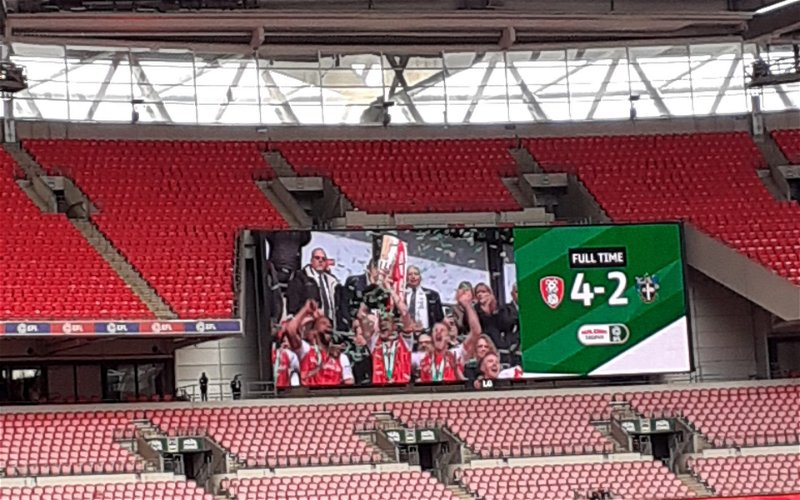 Rotherham United will be playing next season in the Championship but with the season being a distant memory let’s have a quick look at how the Millers got there.

The last month of the 2021/2 season saw Rotherham United grace the hallowed turf of Wembley for the Papa John’s Trophy Final. The Millers took on league newcomers Sutton United who gave the League One leaders a scare on the half-hour mark when the Millers top scorer Michael Smith didn’t defend too well (and we were all wondering where our defenders had disappeared too) and it eventually fell to Donovan Wilson who fired home. Possibly against run of play Rotherham equalised after some good work between Smith and Joshua Kayode the ball went to Ben Wiles who shied away from a Sutton challenge to hit the ball from distance over Sutton ‘keeper Dean Bouzanis, touching the crossbar, and into the net for the equaliser making it one-all going into half-time. But just minutes into the second half Craig Eastmond put the U’s back into the lead and with it looking like it would be disappointment for the travelling Millers fans up popped Jordi Osei-Tutu, who had come off the bench on eighty minutes, to score in time added on to send the tie into extra time. And those thirty minutes were too much for Sutton and a long range shot from Chieo Ogbene put Rotherham in front for the first time plus a headed goal from Michael Ihiekwe saw the Millers win four-two and lift the trophy. And can I just add ‘shame on those Rotherham fans who left before the Osei-Tutu’s goal’ – this is Rotherham United and they often surprise us, the fans!

Rotherham Chairman Tony Stewart said he felt ‘sorry for Sutton who played well but the result has to be good not only for Rotherham United but also for the town.’

Just days after the win we found out the bad news about goalkeeper Josh Vickers who we were told would be out for the season.

After the euphoria of the Wembley win came the next league game which brought us Millers back down to earth. Charlton Athletic were the visitors to the New York Stadium and George Dobson scored a second half goal for them to send the Millers down to third place.

But there wasn’t time to mope with a long Tuesday night trip down to Porstmouth next up for Rotherham. Former Miller Clark Robertson put the hosts in front on the thirty-fifth minute with Marcus Harness making it two-nil in the second half. And on sixty-five minutes another former Miller George Hirst made it three-nil which left Rotherham three points behind MK Dons in second place.

It really looks like our exploits at Wembley took the toll on the Millers and Manager Paul Warne blamed himself saying, It’s a bad night and I felt we had to take our punishment at the end.’

The Millers got back to winning ways the following Saturday lunchtime when a seventy-eight minute Michael Smith goal gave hosts Rotherham all three points over Ipswich Town. Back to second in the table with a game in hand of MK Dons.

The next game was away at Burton Albion, who hadn’t won for six games, who opened the scoring on three minutes with a Cameron Borthwick-Jackson goal. Rotherham nearly pulled one back just after the half-hour mark but Manchester United loanee goalkeeper Matej Kovar did well to keep Michael Smith out. John Brayford made it two-nil for the hosts in the second half giving them all three points.

Just after this game we found out that former Miller Harold Wilcockson had sadly passed away.

A home game against Oxford United was next when there was three goals at the New York Stadium. An unfortunate own goal by Dan Barlaser saw Oxford go in front on ten minutes but in time added on in the first half a Ben Wiles cross found the head of Rarmani Edmonds-Green who made it one-all. Both ‘keepers were on top form in the second half making point blank shots before Luke McNally pulled Chieo Ogbene down in the area and Barlaser made amends for the earlier own goal by converting the spot-kick to give the Millers the win.

After coming from behind to win Paul Warne said that the equalising goal was ‘crucial’.

It was just after this game that the EFL League One Team of the Season was announced with three Millers, Dan Barlaser, Michael Ihiekwe and Michael Smith were included.

Another Tuesday night saw the Millers penultimate game away at Sunderland and when Michael Ihiekwe opened the scoring on seventeen minutes it looked like an automatic place was on the cards. Both Ben Wiles and Richard Wood might have added to the score but when Ihiekwe headed an unstoppable ball into his own net with two minutes to go it meant the last game at Gillingham was crucial.

We found out that our game at Priestfield had been picked for live TV on Sky. When Rarmani Edmonds-Green put the Millers in front on thirty-four minutes the Millers were in top spot of League One but were soon back in second place when Wigan scored at Shrewsbury. A late second-half substitution saw Georgie Kelly make his debut for Rotherham and in the final minute of the game when Chieo Ogbene got the ball, all the Rotherham fans behind the goal stood pointing at Kelly, who the Irish International sent the ball to and the Millers sub hit the ball into the back of the net with the Gills ‘keeper stood watching. Rotherham United were promoted to the Championship – again!

A shattered looking Paul Warne said it would have been nice to have won the title while saying, ‘but I’m not complaining’.

Rotherham United finished in second place, two points behind Wigan in top and one point ahead of MK Dons in third.

Vital Rotherham’s Man of the Month was Ben Wiles.