A Home Points Sees Millers Still In With A Chance 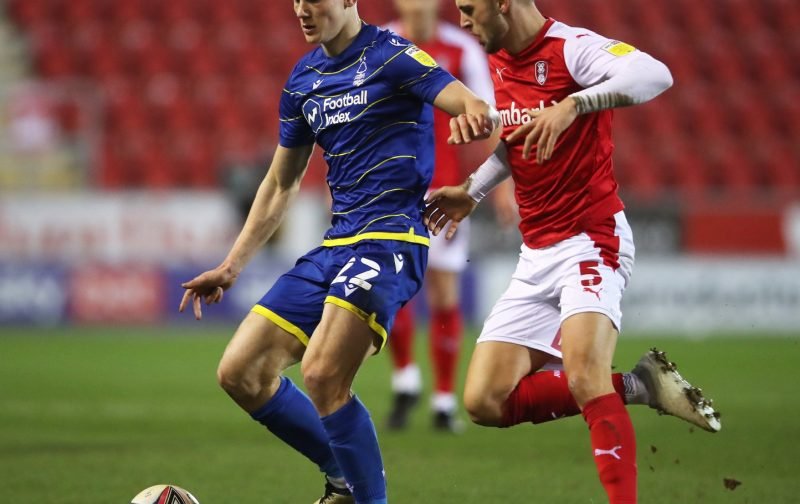 Rotherham United live to fight another day after a late Lewis Wing free-kick saw them get a point in their last home game of the season this afternoon.

The Millers had the first chance on two minutes when Freddie Ladapo shot from outside the box but the ball was put out for a corner which came to nothing. Some nice work from Michael Smith saw him keep the ball in play and it eventually fell to Jamie Lindsay who shot from distance and not missing by much. A lovely ball from Lewis Wing looking for Smith was put out for a throw which was easily cleared. Adam Armstrong got the better of Shaun MacDonald but the Millers defender did well to win the ball back before a Blackburn did well to get into a good position the ball going across goal. Smith got the ball finding Lindsay who in turn sent it for Giles who put the ball into the area only for it to be headed out before falling to Lindsay whose cross was perfect for Ladapo but his shot was easy for Thomas Kaminski in the Blackburn goal to claim. On the seventeenth minute Angus MacDonald had the ball taken off him by Adam Armstrong, one-on-one with Millers’ ‘keeper Jamal Blackman slipped the ball passed him into the net to give the visitors the lead. Minutes later Bradley Johnson got the ball in a good position then found Ben Brereton who put the ball wide. The first yellow of the afternoon went to Michael Smith for a push on Ryan Nyambe. Blackman did well to put a shot from Armstrong behind for a corner which saw the Millers ‘keeper save from Armstrong after it was headed on by Lewis Travis. Rotherham came close on twenty-seven minutes when a good ball in from Wing found Chieo Ogbene whose header went just wide. Just after the half-hour mark Sam Gallagher had a chance for Rovers seeing his header go wide. On thirty-six minutes the Millers had to make a change with Angus MacDonald going off injured and Wes Harding replacing him. Gallagher looked to foul Wood but no flag with Wood doing well to push the ball away to safety.
A shot from Joe Rothwell went just wide before Ogbene won the ball in midfield finding Giles who in turn did well to get the ball to Lindsay. The ball went back to Giles then to Ladapo who saw his shot blocked. In time added on Brereton found Amari’i Bell but some good defending from Harding saw the Millers substitute win a free-kick. The lively Giles found himself in a good position but rushed his shot seeing it go over the crossbar before Shaun MacDonald won a free-kick which was headed out but won back again by Harding who found Ogbene who put the ball in towards Giles but it was defended well.

The Millers brought on Ben Wiles for the second half replacing Shaun MacDonald. An early corner for Rovers saw Michael Ihiekwe head away but it eventually came back for Adam Armstrong stood on the back post who looked to everyone like he’d score only for Jamal Blackman to pull of a brilliant save. The following corner was headed across goal before Ihiekwe again headed away. A long kick from Blackman five minutes into the half found Jamie Lindsay who sent the ball to Chieo Ogbene who tried to get away from his marker but Rovers won the ball sending it upfield. Some nice football from the hosts saw Lewis Wing, Ihiekwe, Ogbene, Wiles, Michael Smith before Freddie Ladapo sent a ball across for Lewis Giles but he couldn’t keep the ball down and saw it sail just over. Rovers broke with Lewis Travis finding Armstrong who put the ball into the box for Ben Brereton who put the ball wide. After some good work from Wood, Ladapo got himself into a threatening position but was immediately surrounded by a number of blue and white shirted players before some good defending by the Millers skipper at the other end saw him clear when Rovers looked dangerous. At the other end a ball in from Giles was headed wide by Ladapo before some super control by the visitors ended with the ball going across goal with no-one there to collect. Rotherham came close on sixty-six minutes when Wing put a superb ball for Ogbene to run onto who saw his strike go inches past the post. Ladapo won a corner which Giles sent in but a Blackburn player got there before the intended Ihiekwe and set off down the pitch with Wes Harding doing well to stop Armstrong in his tracks. Jamie Lindsay saw yellow for foul on Rothwell which was his last action of the game with Dan Barlaser coming off the bench for him as well as George Hirst and Flo Jozefzoon replacing Michael Smith and Chieo Ogbene. Jozefzoon was soon in on the action when he sent in a lovely ball but it was a little high for Hirst. Rovers brought on Tyrhys Dolan for Sam Gallagher followed by a foul on Wiles, who hurt his shoulder, going unpunished although Barlaser got yellow a minute later for a  cynical foul on Travis. Harvey Elliott was the next change for the visitors with Rothwell going off. With four minutes to go Wood won the Millers a free-kick on the edge of the area and with a number of red shirts around it Wing took aim and smashed the ball into the back of the net to make it one-all. A minute later Blackburn ‘keeper Thomas Kaminski did well to put the ball out for a corner from a Hirst header and when the ball came in Hirst was there again but just couldn’t get his first goal in a Millers shirt. Rovers set off at pace down the other end and only some fantastic footwork from Giles saw him put a cross in out for a corner before more good ‘keeping from Blackman saw him deny Armstrong. As the clock ticked into the six added on minutes more good defending from Harding made it difficult for Armstrong to get the ball. A Blackburn corner taken by Liverpool loanee Elliott came close before Giles won a corner for the Millers which Barlaser took finding Wood who saw the ball go wide.

At one time this afternoon the Millers were bottom of the Championship but the late goal from Wing, an earlier goalless draw for Sheffield Wednesday, Swansea coming back from one down to beat Derby and despite Bournemouth losing at Wycombe (huh?) it’s as you were. Rotherham have forty points with two games to play while Derby are three points better off with one game to play. The Owls and Wycombe are also on forty points with one game to play and a worse goal difference than Rotherham.

Can we get out of this? Can we get two wins from our final two games, both away from home? Will we be singing the ‘great escape’ tune at quarter past two on 8th May? Keep watching for the next thrilling instalment!